Rommel became the fourth stallion in the last five years, and the second from Mogumber Park, to capture the Western Australian 2YO and First-season premierships on Saturday.

In recent years, Gingerbread Man (Yarradale), Safeguard (Mogumber) and I’m All The Talk (Darling View) have all been dual WA champions with their initial crops.

“Rommel grafted out those premierships,” Mogumber Park studmaster Colin Brown said.  “He sired 6 individual winners and the prizemoney wasn’t inflated by any sales-related winners.  The reaction from breeders has been fantastic and this season’s book was already building in July.”

Brown is looking forward to sending the increased numbers to interstate sales in years to come.  “The quality is already there and with quantity it will give us the option of spreading his yearlings to Melbourne Premier, Adelaide Magic Millions and hopefully the Gold Coast Magic Millions.”

Rommel (Commands) finished Top 10 on the Australian First-season table and among his initial crop was Doomben winner Military Gambler who sold for $60,000 at last year’s Magic Millions Gold Coast QTIS Sale.   “I loved his colt from the moment I saw him,” trainer Chris Munce admitted.  “He was big, raw-boned and athletic with a great temperament.  He’s still learning but has natural ability.”

Rommel had been a $140,000 buy for owner Santo Guagliardo at the 2013 Gold Coast Magic Millions.  Trained by Neville Parnham, he nailed an early-season nursery at Ascot and was beaten a head by Cadenza in the RL Magic Millions 2YO Classic.

Resuming the following spring, he won the G2 WA Guineas (1600m) and then showed his versatility when storming home to defeat older sprinters in the G3 Zeditave Stakes (1200m) at Caulfield.  “Rommel is a quality horse and his sire Commands was a dominant stallion,” Parnham said shortly after that victory in Melbourne.  “He’s a stunning specimen and will make the grade when Santo retires him to stud.”

Parnham prepares Rommel’s 2yo winners Ultimate Command and Storm Commander for syndicates that include Guagliardo and he went back and purchased Rommel’s full-brother to Pixie Chix for $180,000 at the Perth Magic Millions Book 2 Sale in February.

“Neville reckons he would love a stable full of Rommels,” Brown said.  “We’ve kept him at $4,400 but this could be his last season at that fee because it’s pretty clear they will only keeping improving as three year-olds.”

Rommel stands alongside Safeguard (Exceed And Excel) who is also priced at $4,400 (inc GST) at Mogumber Park in Bullsbrook.  Colin Brown can be contacted for bookings or further information on 0408 251 880. 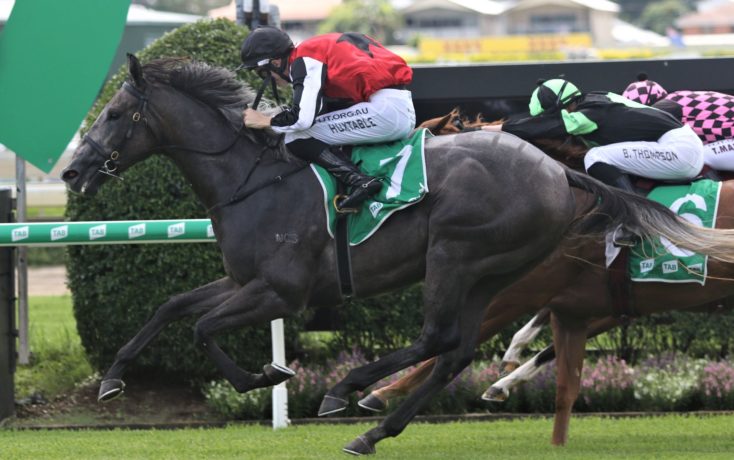