I’m All The Talk opened his account for the new season with Mr Have A Chat in Victoria on Tuesday.

The Darling View Thoroughbreds resident was Champion WA second-season sire in 2020-21 with prizemoney over $2.61 million.  Winter star The Spruiker was his chief earner ($490,330) after passing G2 WA Guineas winner Watch Me Dance ($489,750) on the final day of the season.

Mr Have A Chat (4g I’m All The Talk – Living Colour by Oratorio) was winning for the third time in the Sportsbet Hcp (1100m) at Pakenham on Tuesday.  He tracked front-runner Hit The Moon and then levelled up before lengthening to a convincing victory as the $3.90 favourite.

“That’s a terrific result for the owners,” trainer John Price said.  “They’re in Grand Syndicates with Sam Lyons and Peter & Karen Morley who do a wonderful job.  He’s a WA-bred horse and carried a bit of weight (63.5kg).  I needed a man, boy and army to help me carry the saddle down to the stalls!”

Mr Have A Chat had run fifth on debut in the LR Blue Diamond Preview at Caulfield in January 2020 and added a running double at Werribee and Great Western in January.  He’s the penultimate foal of an unraced three-quarter sister to Motion Pictures (G2 Karrakatta Plate) and cost $24,000 from Mungrup Stud at the 2019 Perth Magic Millions.

The Spruiker has been spelled following his fifth win in a row at Belmont on Saturday.  “I’m loathe to have a crack at the summer carnival because it’s a different ball game,” trainer Steve Wolfe told RWWA.  “He’s pulled up a million dollars and we will let him do the talking for races like the Mt Barker Sprint and Bunbury Stakes.”

Apart from a dominant second-season title, I’m All The Talk was also WA Champion 3yo sire in 2020-21 defeating Snippetson and Blackfriars.  He stands for a $6,600 (inc GST) service fee at Darling View Thoroughbreds. 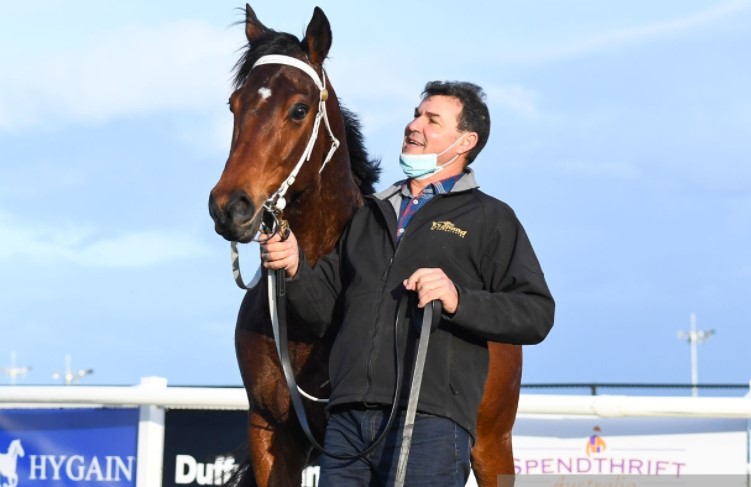