TBV vendors are coming off an amazing Inglis Melbourne Premier Yearling Sale and they’re confident the Adelaide Magic Millions will continue the run of success at the majors this year.

Against all predictions, the Australian thoroughbred industry has once again shown its resilience with record-breaking results at the Gold Coast Magic Millions, Inglis Sydney Classic, NZB Karaka and at Oaklands last week.

Romsey-based Springmount studmaster Michael Flannery sold a Written Tycoon – La Haraka colt to Ciaron Maher for $480,000 at Melbourne Premier and he has another Written Tycoon colt catalogued for Day 1 in Adelaide this Tuesday.

Both colts were conceived at Woodside Park in Tylden as was the $1.10 million Written Tycoon colt that topped Melbourne Premier last week.  “We arrived in Adelaide first thing this morning and I must say the activity is much busier than usual,” Flannery reported on Friday afternoon.  “We’ve been very happy with the number of inspections and hopefully the results will follow on from the other sales this year.”

Springmount’s Written Tycoon – Sistine Princess colt (Lot 20) is from a half-sister to Jukebox (G3 Vain Stakes) and the dam of the 2020 Melbourne Premier sale-topping colt Bruckner (Snitzel) who finished third on debut in the Black Opal Preview (1000m) in Canberra on February 19.

“The timing is right with Written Tycoon and this colt is a big individual with a fabulous temperament,” Flannery explained.  “He parades well and has plenty of substance.  The x-rays are clean so who knows where the bidding will lead.”

Springmount also has a Merchant Navy colt out of Pindara (Lot 297).  There were 8 first-crop yearlings by Merchant Navy that made six-figures at Oaklands and his Adelaide colt is heading in the same direction.

Pindara (Star Witness) is a half-sister to Liesele (LR Alinghi Stakes) and Loved Up (RL Scone Guineas) and for a first foal, her colt is solidly-built with plenty of bone.  “He has a lovely attitude,” Flannery added.  “And he looks a lot like his grand-father (Fastnet Rock).”

Sally Watkins returns to Adelaide with 8 yearlings – all by commercial sires – from her base in Ned Kelly country at Glenrowran.

The Willaroon last-crop Sebring colt from I’ll Decide (Lot 201) is a standout according to Watkins.  “He’s a special colt.  His dam is an I Am Invincible mare who won two sprints at Morphettville for the McEvoys and he’s one of my picks of the yearlings in Adelaide.”

The So You Think yearlings sold to $450,000 in Melbourne and Watkins was happy to receive $120,000 for her So You Think – Casino Card colt from Mornington trainers David and Coral Feek.

Her So You Think in Adelaide (Lot 115) from Betelgeuse (Darci Brahma) who is a sister to G1 Australian Oaks winner Gust Of Wind.  “She’s a first foal and is showing all the signs of a stayer.  Nice and scopey filly with the right attitude.”

Leneva Park sold Rich Enuff yearlings to Byron Cozamanis and Hong Kong’s Upper Bloodstock at the 2020 Adelaide Magic Millions and they’re back with a filly by the Woodside Park sire this year.

“She’s a beauty and a typically athletic Rich Enuff,” Leneva Park bloodstock advisor Mick Sharkie said.  “She’s not the finished product yet but is coming on in leaps and bounds.”

“He looks a project horse,” Sharkie predicted.  “He has a lovely frame and will keep growing into it with a trainer prepared to take time.”

The Sir Prancealot filly (Lot 366) has also progressed during her sales prep at Leneva Park in Longwood and Sharkie reckons their Ilovethiscity colt (Lot 403) will punch above his weight in Adelaide.

There’s not a whole lot of depth in his pedigree but he’s an athletic, easy-going colt and might be a trade horse for pin-hookers looking ahead to the Ready To Run Sales later this year

Noor Elaine received an encouraging response to its 2020 Adelaide consignment and studmaster Mark Calwell is back with 8 colts by resident sire Ilovethiscity and once each by Rubick and Overshare.

Ilovethiscity covered 121 mares last year and that should build his tally to over 250 foals from three books at Noor Elaine.  “Our colt from Grand Rhapsody (Lot 189) is a cracker and he’s sure to turn heads,” Calwell said.  “So is the colt out of Laynlow (Lot 238).  His half-sister Sofie’s Gold Class was stakes-placed in the Sunshine Coast Cup in January.”

There are several first-crop yearlings by Overshare (I Am Invincible) entered for the Adelaide Magic Millions including the Noor Elaine colt from Three Little Pigs (Lot 351).  He’s a big, strong colt according to Calwell and can kick-start the stud career of his stakes-winning sire who won a G3 Zeditave Stakes for Team Hawkes,

“Lloyd Kennewell bought his older half-sister by Holler last year,” Calwell added.  “We kept a share and she has been named Nursery Chime.”

The flashy colt by Rubick (Lot 262) is built to go early and is aptly described as “a good looking rooster” by the team at Noor Elaine.  He’s the second foal from Mariposa Lily (Oamaru Force) who won a Benalla maiden on debut for trainer Wayne Nichols.

Foxwedge is flying with two Group 1 winners already this year and they’ve arrived right in time for vendors like Millford Thoroughbreds.

Nagambie-based Richard Kerry and Jarrod Byers have entered a Foxwedge – Princess Carnegie colt (Lot 304) for Adelaide.  He’s a half-brother to King’s Pact (Lucky Owners) who was stakes-placed at Randwick before transferring to Hong Kong where his wins included the Lusitano Challenge Cup.

Foxwedge sired Run Fox Run to win the G1 Cape Flying Championship at Kenilworth in January and Lunar Fox landed a longshot victory in the G1 Australian Guineas at Flemington in February.

Millford Thoroughbreds has already had success in South Africa with Arcetri Pink (Rock of Gibraltar) in the G2 South African Guineas and its list of Australian Group 1 winners includes Pinker Pinker, Precious Gem, Scales Of Justice and Perfect Reflection.

The Stud’s Sales & Nominations Manager Phil Marshall reflected on his loss ahead of his penultimate crop going through the Adelaide Magic Millions.  “It was a sad day when he passed away.  We called him the gentle giant.  He was a lovely horse to work with and his progeny inherited that same straightforward attitude.”

There are four Fighting Suns from home base and another four from outside clients by Victoria’s Champion first-season sire in 2017-18.  His early crops included stakes performers the calibre of Chess Star, Roccabascerana and Salton Sea who were exported to Hong Kong and Singapore.

“I really like him.  He’s tough and looks a runner.  He’s correct and light on his feet for such a good sized colt.”

Fighting Sun’s fillies from Fine Bubbles (Lot 171) and Madam Gangster (Lot 256) are both lovely types with top pedigrees to boot.  They should appeal to trainers and to owner-breeders and studs for their residual value.

The Adelaide connection will also be drawn to Sun Stud’s Thronum – Always Discreet filly (Lot 99).  “Everyone knows the Discreet family.  That’s the reason why we’re here.  This filly is a similar type to all the other good members of the family – fast and precocious with the same attitude and temperament.” 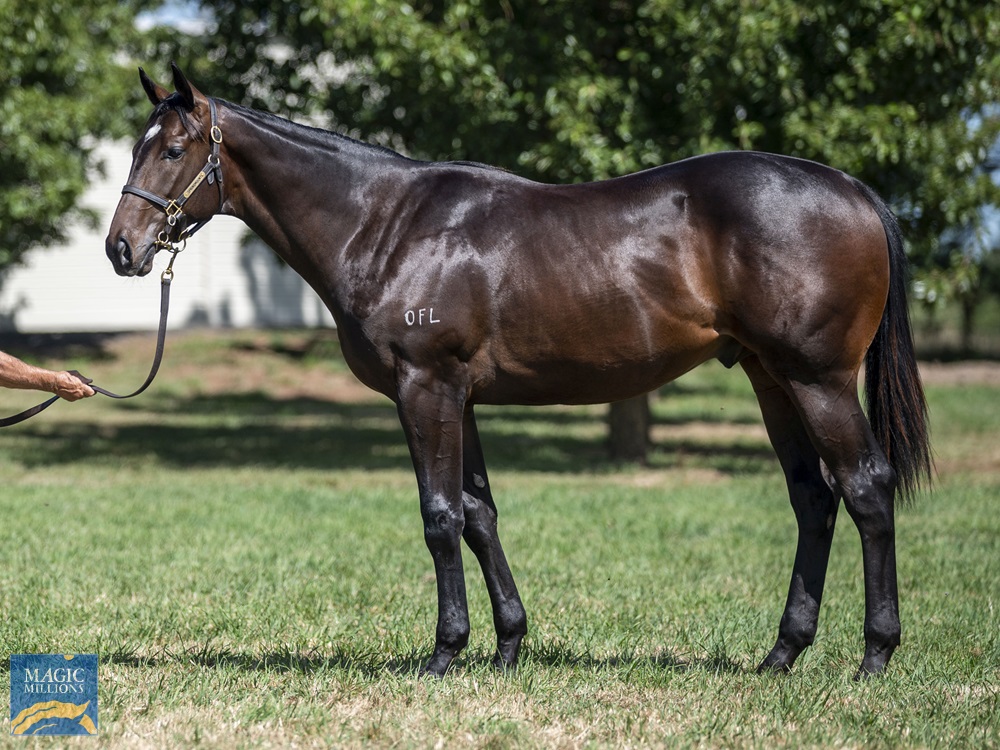