More Than Ready (USA) was in his usual element on Saturday siring a Group 2 winner at Flemington and a Group 1 winner at Santa Anita.

Starelle prevailed in a three-way photo to become the 208th Stakes winner by the Vinery legend in the Kewney Stakes (Gr.2, 1600m).  Hours later, his 26th Group 1 winner arrived after Hot The Road burst through a gap in the Frank Kilroe Mile (Gr.1, 1600m).

Still a maiden going into Saturday, Starelle had nevertheless been black-type placed twice at Flemington before the breakthrough.  “She was just beaten in the Edward Manifold here in the spring and thoroughly deserved the win,” trainer Danny O’Brien declared.  “She’s always competed in good races and dug deep today.

“She’s got a great pedigree and is really furnishing now.  There’s more wins in store for her owner Robert Anderson.”

The Australasian Oaks (Gr.1, 2000m) in Adelaide on May 1 is a possible target and along the way O’Brien has options in the Alexandra Stakes (Gr.3, 1600m) at Moonee Valley on March 19 and the VOBIS Gold Day at Caulfield on April 17.

Starelle was bred by Hesket Bloodstock’s David & Jenny Moodie and is the first live foal of Star Of Giselle (Reset) who was trained by Mat Ellerton & Simon Zahra to win a Queen of the South Stakes Gr.2 in Adelaide and a Tesio Stakes Gr.3 and Mannerism Stakes Gr.3 in Melbourne.

“She has done a great job meeting all of those quality horses at level weights,” jockey Craig Williams added.  “Being a maiden, she didn’t quite know how to put them away so it was a very good win.”

Hit the Road is More Than Ready’s latest star in North America after notching his first Group 1 in the Frank Kilroe Mile.  Jockey Florent Geroux sent him through a narrow opening in the straight to score by a neck over the favourite Smooth Like Strait (Midnight Lute).

It was his 6th win in 9 starts after coming off a Group 3 victory in the Thunder Road Stakes at Santa Anita last month.  He hadn’t competed with the elites since a two-length loss in the 2019 Breeders’ Cup Juvenile Turf.

“It’s my first Group 1 but I don’t want to make this about me,” trainer Dan Blacker said.  “This is all about Hit The Road.  He’s a true racehorse.  It’s a credit to the owners, too.  They’ve been so patient and given him time to get over some bone bruising last year.  That’s the key.  To win these big races, you have to give horses time to reach their potential.” 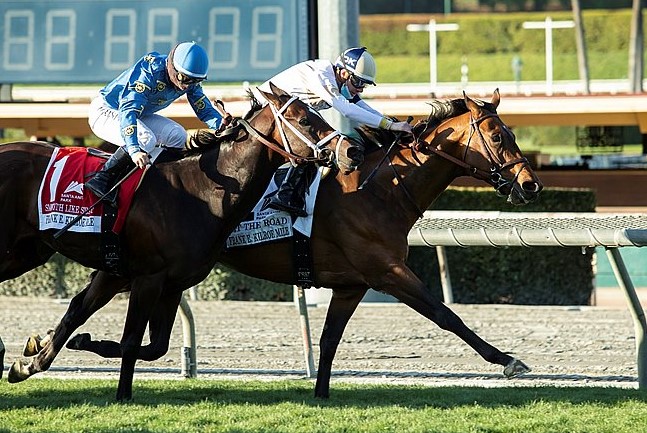