The 3yo daughter of Vinery champion More Than Ready bided her time at Belmont Park before Irad Ortiz Jr. pushed the button to nail front-runner La Coronel by a neck.  “She broke good and put me in a good position saving ground,” Ortiz Jr. said.  “Then I tipped her out and she took off.”

Bred by Haras D’Etreham, Uni won the Prix Matchem-LR (1800m) at Maisons-Laffitte in May and, since arriving in North America, had been placed in the Belmont Oaks-Gr.1 and Lake Placid Stakes-Gr.2 at Saratoga.

Trainer Chad Brown predicted a big future for Uni after the Belmont Oaks when she powered home to fill out a stable trifecta in July.  “She’s exciting.  We really like her,” Brown added on Saturday.  “I want to talk to the owners about the (G1) Queen Elizabeth Stakes at Keeneland in October.

“The fractions weren’t very strong today.  It’s hard to gauge how slow the turf course is but there was plenty of give and you could see the divots coming up.  She got held up a touch, but man, this horse has some kick.  She just keeps improving.”

LaPenta also races More Than Ready’s last-start Saratoga stakes winner Catholic Boy.  He will use the Pilgrim Stakes-Gr.3 at Belmont Park on September 30 as final lead-up to the Breeders’ Cup at Del Mar in November.

Closer to home on Saturday, More Than Ready 3yo filly Cellargirl flew home for an encouraging third in the Tea Rose Stakes-Gr.2 at Randwick.  The Brisbane visitor is lightly-framed and is unlikely to back up in the Golden Rose-Gr.1 next week.

Jockey Michael Walker believes Cellargirl is good enough to add interstate black-type to her winter carnival stakes win at Doomben.  “That was a really, really good run,” Walker said in post-race comments that were echoed by Ortiz.  “When I put the stick behind her, she took off.”

More Than Ready is currently covering his 17th southern book at Vinery for a $66,000 (inc gst) service fee. 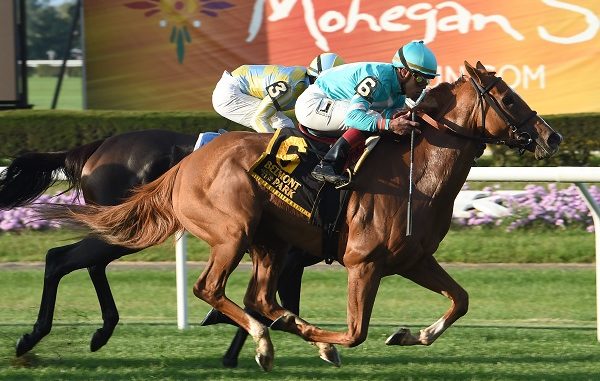