Jindera Park has added a second stallion to its roster this month with the arrival of Group 3 winner Va Pensiero.

Va Pensiero (Stratum – Rosmarino by Langfuhr) displayed a blistering turn of foot at his second start when leading home fellow Stratum colt (and subsequent stakes winner) I’m All The Talk in a summer juvenile at Warwick Farm.  He clocked a class-record 56.7s for 1000 metres.

Trainer Jason Coyle sent him for a spell after finishing down the track in the G1 Golden Slipper and then watched him mature into one of the nation’s best three year-old sprinters the following season.

Resuming in the G3 San Domenico Stakes (1100m) at Rosehill, he stalked Darley front-runner Kuroshio to score by three-quarters of a length and then doubled up in the G3 Run To The Rose (1200m) with a wire-to-wire win over future Australian Horse of the Year Dissident.

Run To The Rose winners are in good company with a roll-call lead by Pierro, Exosphere, Hallowed Crown, Smart Missile and Denman.  “He’s a very good colt,” Coyle said.  “And he’s been up against the good ones since Day 1.”

Va Pensiero owned genuine Group 1 ability; however, his race career was interrupted by a recurring tendon injury which ultimately ended a 16-start career.  He was sidelined for almost a year before a failed comeback in the G1 Lightning Stakes at Flemington in February.

An outstanding individual, Va Pensiero is the highest-rated son of Golden Slipper winner and Champion 2YO Sire Stratum to stand at stud.  His introductory fee is $7,700 (inc gst). 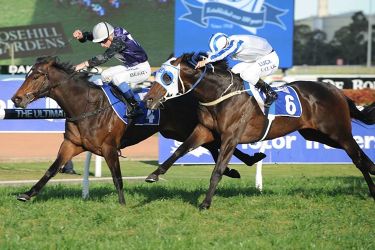