Vinery Stud struck twice in quick succession with a couple of colts that made the Top 10 leader-board during Day 1 of Magic Millions National Weanling Sale on Thursday.

Both youngsters are heading to Victoria.  The Microphone – Allure colt (Lot 135) made $260,000 to the bid of Musk Creek Farm on the Mornington Peninsula.  And minutes later Nagambie-based Yulong Investments paid $250,000 for the Written Tycoon – Amaryliss colt (Lot 137).

The first foals of Vinery’s Group 1 winning sprinter Exceedance were also popular on the Gold Coast with all five offered finding new homes in Queensland, NSW (2), Victoria and New Zealand.  They sold to $140,000 at an average of $93,000.

Musk Creek owner David Kobritz and farm manager Scott Williamson beat off some spirited competition for the Microphone colt from NZ-bred mare Allure (Lonhro).  “We loved him on type – he’s a strong, mature colt with a lovely attitude,” Williamson said.  “He will be back here in January for the Yearling Sale.  Microphone was the Champion 2YO Colt of his generation and we love Lonhro as the damsire.”

Kobritz bought Lonhro’s Champion Colt Pierro for $115,000 at the 2010 Magic Millions National Foal Sale and then pin-hooked him for $230,000 to Gai Waterhouse as a yearling.

The Yulong Investments team were sold on the Written Tycoon colt from the moment they inspected him at Stable H on the Gold Coast.  His dam Amaryliss (Commands) was a 3yo winner at Eagle Farm and she was among the first book covered by Ole Kirk at Vinery last year.

“He’s a strapping son of Written Tycoon and we’re delighted to secure him,” Yulong reported.  “He’s from a well-performed family and will be offered for sale as a yearling.”

Attunga Stud’s Brian Nutt topped the Exceedance vendors selling the colt from To Be Sure (Lot 97) to agent Dermot Farrington for $140,000.  “He had heaps of hits and was very popular here on the grounds,” Nutt said.  “A beautiful attitude with a good rhythmic walk, he’s a November foal so there’s lot of improvement to come.

“I bred him and I’ve always had a lot of time for Exceedance.  He was an extraordinary sprinter and I supported him again last year.”

Nutt also sold the Exceedance – Beside You filly (Lot 165) for $54,000 to Trilogy Racing’s Jason and Mel Stenning.  The Central Coast couple paid $80,000 for an Exceedance – All Too Free colt at the Inglis Australian Weanling Sale last month.

Supreme Thoroughbreds weighed in with $130,000 to finish second on the Exceedance leader-board on Thursday.  The colt from Amplified (All Too Hard) was offered by Baramul Stud as Lot 141 and is out of a half-sister to Group 2 Sweet Embrace Stakes winner Always Allison (More Than Ready).

“Exceedance was a very good racehorse and I think he will make a sire,” Supreme’s Brett Grayling said.  “He’s stamping them and I really wanted one for our draft at next year’s Premier Sale in Melbourne.”

The Victorian connection also played a hand with the sole Star Turn foal being offered on the Gold Coast.  RIFA Mustang paid $67,500 for the Vinery sire’s chestnut colt from So You Think mare Sublime Dancer (Lot 71) that was catalogued by Noralla Stud.

Day 2 of the Magic Millions Weanling Sale continues on Friday with Vinery-consigned foals by Exceedance (Lot 312 & 331) plus Capitalist (Lot 257) and Hellbent (Lot 292). 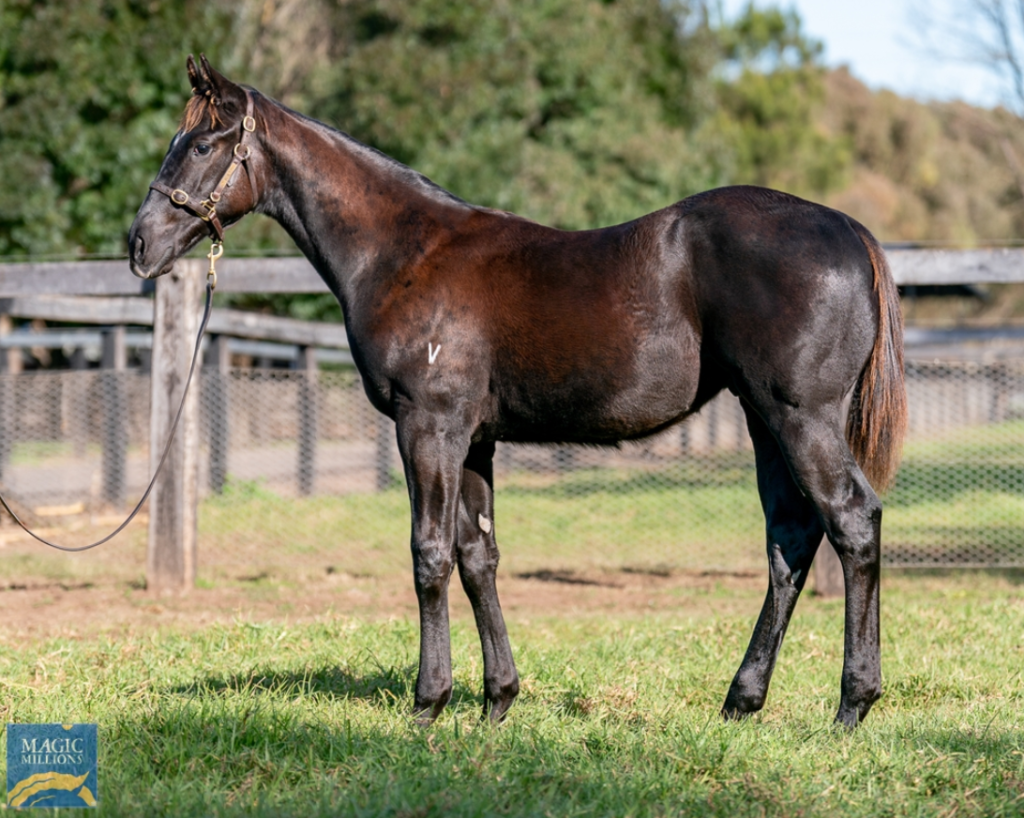