Perth sprinter Triple Missile will be winning more races in Melbourne on the back of his powerful victory in the VRC Country Winter Championship (1400m) at Flemington on Saturday.

The Balmoral Park homebred is trained by Lindsey Smith and had been destined for an interstate trip ever since charging home to win over 1200m at the Ascot summer carnival last November.  He transferred to Smith’s Warrnambool stables and hit the line for a first-up fifth on his home track in the LR Wangoom Hcp (1200m) last month.

Triple Missile (Smart Missile) joined in at the furlong and responded to a well-timed, hands-and-heels ride by Craig Newitt to defeat stablemate Mystery Shot (Shooting To Win).  It improved his career-card to 6 wins in 12 starts for $270,000 in prizemoney including $33,000 of Westspeed bonuses.

“It’s great to get the quinella.  Both horses ran storming races,” Smith said.  “Triple Missile was probably a little bit keen early but Froggy (Newitt) tracked our other horse through and got the room when he needed it for that huge finish.

“He was probably carrying a little bit of condition at Warrnambool and we have him one gallop in between.  That did the trick because he’s seen out the seven furlongs no worries.”

His USA-bred dam Triple Latte (Medaglia d’Oro) had been sourced by agent John Chalmers on behalf of Balmoral Park owner Neil Irvine when she was carrying Triple Missile.  She was bred by USA Eclipse Award winner James Hettinger who had purchased her Argentina-bred Group 2 winning dam Miss Mary (Southern Halo) for $130,000 at the 2002 Keeneland November Sale.

Triple Latte was imported to Australia in 2011 and foaled the Foxwedge winners Jamocha and Finnick prior to arriving in WA.  She delivered a War Chant (USA) filly in November. 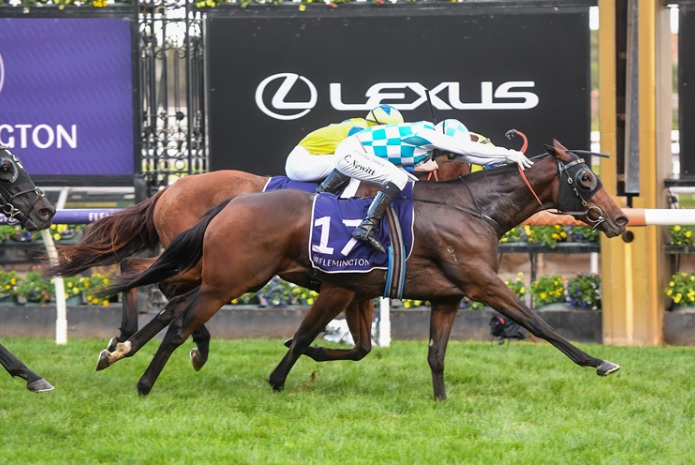