All Too Hard is edging ever closer to siring 100 individual winners this season after his promising newcomers Can’t Be Done and Too Good Too Hard completed a running double at Sale on Tuesday.

Can’t Be Done won the Ladbrokes Back Yourself Maiden (1105m) on debut and Too Good Too Hard lived up to her name at the first time of asking in the Ladbrokes Multiverse Maiden (1205m).

Vinery sire All Too Hard has three crops racing and his Australian tally now stands 93 individual winners of 149 races for prizemoney of $5.34 million.

Can’t Be Done (2g All Too Hard – Nobody Gets by Forestry) gave nothing else a chance with a front-running, two-length victory.  “That was money for jam,” jockey Jamie Mott said after the procession.  “He had trialled nicely and jumped straight into gear from the awkward gate.

“He showed a sharp turn of foot once I balanced him up in the straight.  He gave me a good feel and can really go on with it now.”

Trainer Danny O’Brien bought the youngster for $120,000 at the 2018 Gold Coast Magic Millions on behalf of Uluru Stud owner Jeff Dimery.  They raced Shamexpress to a Group 1 victory in the VRC Newmarket Hcp in 2013.

Can’t Be Done’s dam Nobody Gets was conceived in Kentucky and she is a half-sister to VRC Vanity Stakes Gr.3 winner Musidora.

Too Good Too Hard circled the field to put her race to bed with an exceptional finishing burst for trainer Phillip Stokes.  She started a short-priced favourite first-up and the ease of the win impressed stable apprentice Kayla Crowther.

“She’s a game filly and that will please the boss,” Crowther said.  “She likes to race outside other horses so it wasn’t the prettiest of rides.  But she did everything right when I asked her to let down.  She relished cut in the ground and it’s onwards and upwards for her during winter.”

Too Good Too Hard (3f All Too Hard – The Good Wife by Redoute’s Choice) was a $120,000 buy for Stokes at the 2017 Inglis Melbourne Premier Sale.  Her dam is a half-sister to multiple Group 1 winning mare Divine Madonna. 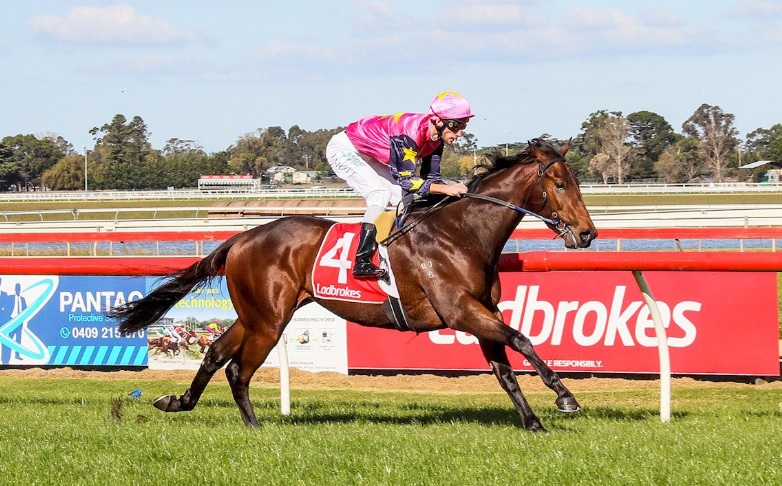