Winx has turned in one of her greatest ever performances to overcome a horror start for a stunning win in the G1 Warwick Stakes (1400m) at Randwick.

Chasing her 18th straight success on Saturday, the champion Street Cry mare stumbled out of the gates and lost many lengths before settling at the back of the field.

Jockey Hugh Bowman allowed Winx to gradually work into the race, however, with her rivals smashing 33s for the last 600m, the world’s best turf horse was required to dig deep to reel in Foxplay.

Sent out a $1.10 hot-pot with bookmakers, Winx was expected to win although many thought the streak was about to end when she trailed the field by many lengths after a few seconds.  “I was a bit worried,” Bowman said.  “The way the track is playing, with the very slick times, I was thinking it could be mathematically impossible to catch them.

“There was nothing I could do about that.  I just had to rely on her engine.  She’s just so much better than them.  What can I say, she’s just a freak.”

Winx’s current preparation is centred around equalling Kingston Town’s record of three consecutive wins in the G1 Cox Plate at Moonee Valley in October.  The Warwick Stakes improved her record to 22 wins from 28 starts and earnings of over $13 million. 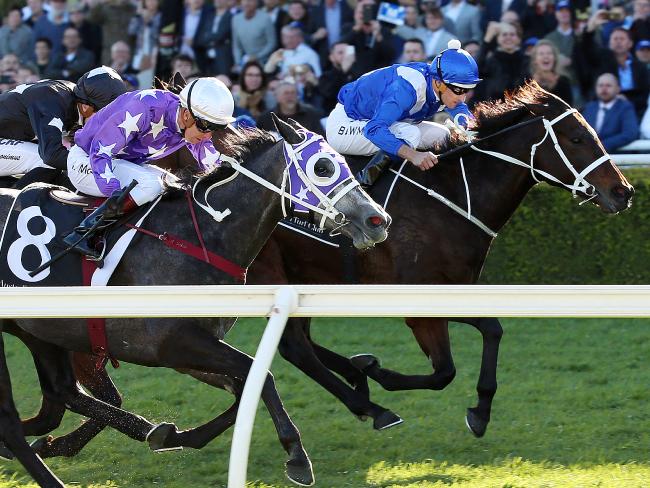