Trainer Steve Wolfe has decided against sending Ex Sport Man to Brisbane for feature races at the upcoming winter carnival.

The Playing God gelding is Western Australia’s 2YO Champion-elect following victories in the G2 Karrakatta Plate and RL Magic Millions Classic.  He was hailed the winner of the G3 WA Sires’ Produce Stakes on Saturday before being collared by Hoi An.

“He’s pulled up fine,” Wolfe said on Monday morning.  “He’s clearly the best 2yo in the State and has done his job.  Queensland was never more than just a possibility.”

Wolfe and Ex Sport Man’s large syndicate of owners are playing a long game and have resisted the lure of a trip east.  The two $1 million races under consideration at Eagle Farm were the G2 BRC Sires’ Produce Stakes (1400m) on May 29 and G1 J J Atkins Plate (1600m) on June 12.

Ex Sport Man is a son of Darling View Thoroughbreds sire Playing God and has earned $528,946 after graduating for $40,000 at the 2020 Perth Magic Millions Yearling Sale.  Wolfe also confirmed he has been the subject of three substantial offers this year.

“She’s had a nice spell and is enjoying her work,” trainer Neville Parnham reported.  “She raced below her best last campaign but looks real good now.”

Kay Cee landed the G2 Lee-Steere Stakes (1400m) at Ascot in November but didn’t fire in two subsequent summer outings, including a failed defence of the G1 Kingston Town Classic at her latest start in December.

“She had so many issues,” Parnham continued.  “She ran a temperature two or three times and the only time I had her right was when she won the Lee-Steere.  She was just awesome that day and blew them away.  If we get her back to her best then she’s up to the really good grades on the east coast.

“There’s a few of those quality mares races in Melbourne and we will certainly look at them as long as she comes up well during the winter here.”

Hoofnote:  Steve Wolfe is still weighing up the logistics of sending Watch Me Dance across to the Brisbane winter carnival.  The daughter of Darling View sire I’m All The Talk was placed in the Marjorie Charleson Classic (1200m) on Saturday.

Watch Me Dance was named WA Champion 2YO in 2019-20 and trained to win the G3 Champion Fillies and G2 WA Guineas earlier this season. 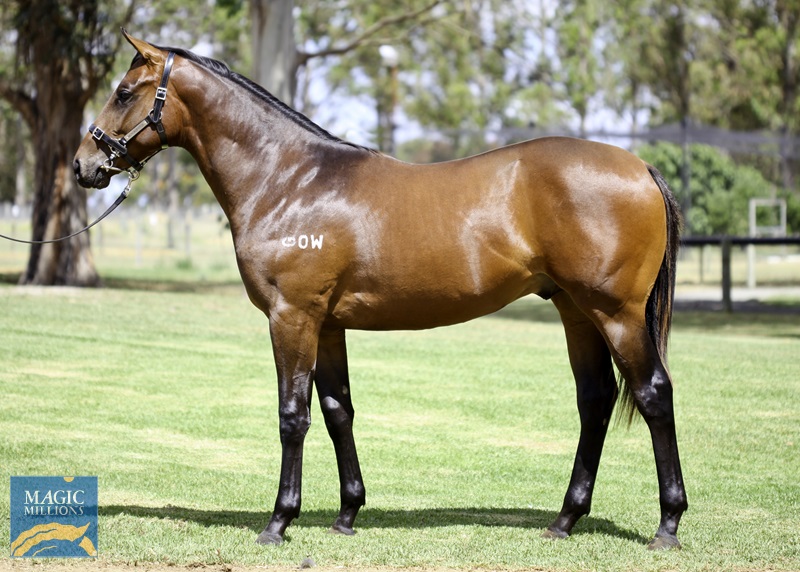 EX SPORT MAN
Pictured as a yearling prior to graduating for $40,000 at the Perth Magic Millions