Alcari lost his way in Hong Kong last season but the Ricky Yiu-trained sprinter has found a new lease of life down the straight course at Sha Tin.

Winless in 2020-21, the first-crop son of Vinery sire All Too Hard hasn’t been out of a place in his last five starts over the minimum trip.  He broke the run of outs in the Opal Hcp (1000m) in December and added the Tai Mei Tuk Hcp (1000m) on Saturday with a willing finish to boost his bank balance to the equivalent of AUD1.62million.

“He’s a horse with a bit of character and we’re really happy with him,” Yiu declared as Karis Teetan brought the veteran back to scale after his 52nd start.  “He hit a bad spot at one stage but went to Conghua and recovered from some leg issues.  He enjoyed the environment there and really likes the 1000m straight-course here.”

Alcari was a $280,000 buy for Yiu at the 2016 Gold Coast Magic Millions.  His dam Cariad (Sequalo) was a Listed winner of the Nudgee Hcp and Bright Shadow Quality in Brisbane.

His unraced 3yo half-brother King High (Not A Single Doubt) is back in work with trainer Chris So at Sha Tin after a spell in Conghua.  A $520,000 buy for Snowden Racing at the 2020 Gold Coast Magic Millions, he won a Newcastle maiden before earning black-type when placed in the Oxlade Stakes (LR, 1000m) at Eagle Farm in June 2021.

Fellow first-crop expat Shanghai Dragon completed a running double for All Too Hard in the Yuen Chau Tsai Hcp (1800m) on Saturday.  The Benno Yung-trained galloper tracked the leader before taking charge at the top of the straight to highlight his durability and that of the breed.

Shanghai Dragon cost $340,000 from Sledmere Stud at the 2016 Inglis Easter Yearling Sale and his earnings increased to AUD652,000 on Saturday for owner Steven Leung.  His USA-bred dam Miss Tizzy (Cee’s Tizzy) was exported to Australia after winning a Stakes race in New York.

All Too Hard leads a Vinery roster that’s on fire in Hong Kong.  His flagbearer Wellington tops the HKJC International Sprint Ratings on 116 alongside Sky Field (Deep Field) after a last-start victory in the Queen’s Silver Jubilee Cup (Gr.1) and will go clear with a successful defence of the Chairman’s Sprint Prize (Gr.1) at Sha Tin on April 24.

Press Statement’s first crop have also been in winning form via Hurry Hurry Gain, Steel Win and most recently with the Frankie Lor-trained Free Foal in the Oncidium Hcp (1600m) at Sha Tin on March 6.

Lor doubled up with Flaming Passion for Headwater late last year and the Vinery sire was back in business when Manfred Man’s promising 3yo Joyful Mood scored second time out at Happy Valley on March 9.

Star Turn’s exciting 3yo Cordyceps Six has black-type potential on the back of a 50% strike-rate in 10 starts.  His latest win in the Lek Yuen Hcp (1200m) at Sha Tin a fortnight ago earned connections a HK$1million (AUD175,115) High Achievement Bonus.

Trainer Richard Gibson confirmed the speedster handled his first Class Two assignment with aplomb.  “He showed a lot of class and Blake (Shinn) gave him a beautiful ride.  I think he’s one of the best three year-olds we’ve seen in several years and he has a very good future.” 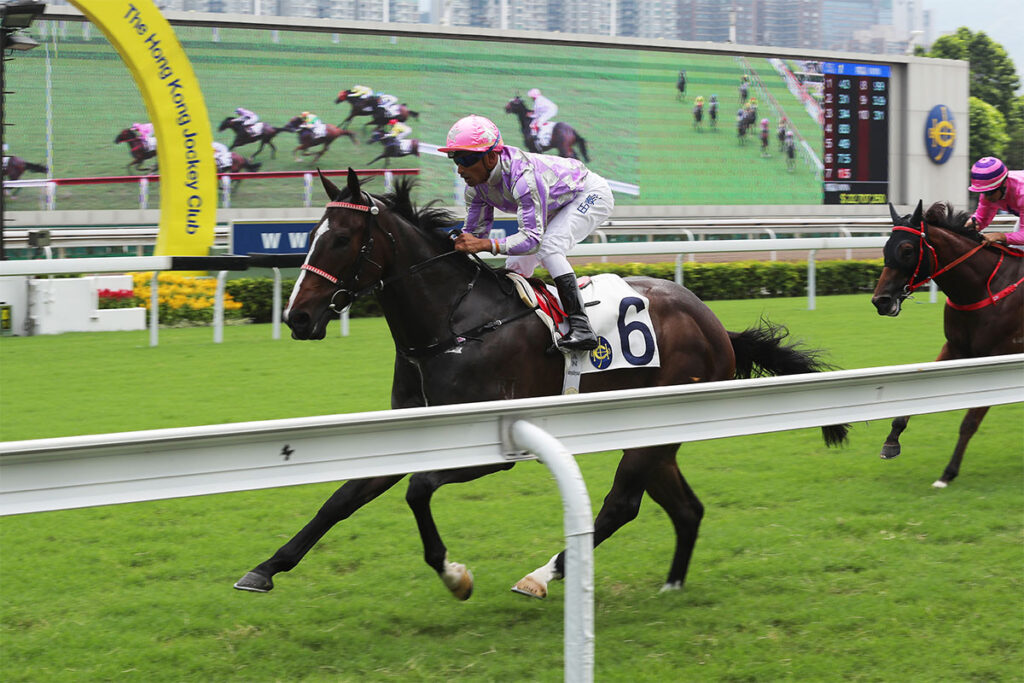