Capricorn Man did it at both ends for his connections in the Crown Perth Plate (1200m) at Ascot on Saturday.

Racing for the third time, the strapping 2yo son of Alwyn Park sire Maschino hit the ground running to cross a capacity field and then accelerated to a winning break at the top of the straight.  He responded to a positive ride by Jordan Turner with a two-length score from Playhouse Patron (Patronize) and Cruise To Victory (Lucky Street) in a quick 1.10.79s.

“Barrier 14 was a concern but he got to the front easily and then capitalised,” co-trainer Jake Casey said.  “Things didn’t go right for him last time so we took luck out of the equation today.  He’s a level-headed young horse and cruised along in the lead for Jordie.

“The (G2) Karrakatta Plate is three weeks away and he will go straight into the race.”

Capricorn Man was purchased for $100,000 by Wally Daly from Blackwatch Stud at last year’s Perth Magic Millions and there’s no shortage of black-type in the immediate pedigree.  His dam Corvetto (Dylan Thomas) is a half-sister to Spark Of Life (Nine Carat) who was a Group 1 winner in Sydney (AJC Galaxy) and Melbourne (MVRC Manikato Stakes-twice).

Corvetto was sold by Segenhoe Stud for $50,000 as a yearling in 2011 and sent to Perth where she failed in three starts for Trevor Andrews.  Retired to Blackwatch Stud in Coolup, she has also foaled this season’s Belmont winner Olden (Alfred Nobel) and her most recent is a yearling filly by Sessions.

Daly and the father-son team of Sean & Jake Casey travelled to Victoria to win the LR Hareeba Stakes and VOBIS Gold Sprint with Laverrod (Toronado) this time last year.  They also topped Day 2 at last month’s Perth Magic Millions Yearling Sale with a $160,000 bid for the Merchant Navy half-brother to Amelia’s Jewel. 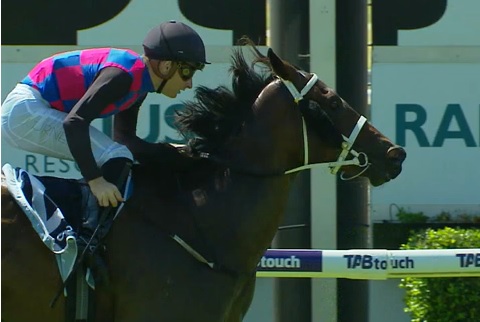