Lyons had purchased a colt by Swettenham Stud shuttler Equiano at the Tattersalls Ireland September yearling sale before saddling Blood Moon to victory at Dundalk.  A short-priced favourite, he denied debut winner Well Caught (Zoffany) by a half-length over 1200m.

Blood Moon (2g Equiano – First Eclipse by Fayruz) was Group 3 placed in the Curragh Stakes last month and his juvenile campaign ends with 2 wins and 5 placings in 8 starts.  He had been entered for the LR Blenheim Stakes at Fairyhouse next week but will go out for an immediate spell.

“It’s a nice way to end the year and he’s been a model of consistency,” Lyons said.  “We think he will be a proper stakes horse but he rushes his races and we need to teach him to go through the gears.”

Lyons was active building his team for next year at the Tattersalls September Sale nearby his stables in Co Meath.  “It’s been a strong week,” he said.  “I bought four on Day 1.”

His Equiano colt cost 28,000 euros (AUD 44,605) and is a half-brother to LR Snowdrop Stakes winner Agony And Ecstasy (Captain Rio).

Top price among the half-dozen Equiano yearlings at the September Sale was the filly from Greensand (Green Desert) that cost Ann Duffield 50,000 euros (AUD 79,650).  Duffield trained the first stakes winner by Equiano when Dark Reckoning claimed the G3 Firth of Clyde Stakes at Ayr in September 2014.

Equiano (Fr) sired 4 individual first-crop winners in the first month of the new Australian season and he stands for a $13,750 (inc gst) service fee at Swettenham Stud. 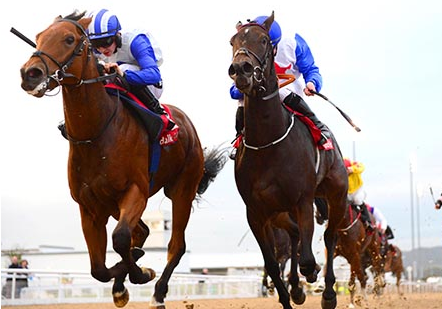