Boom Chicka Boom almost got lost in the wash-up after All Too Hard’s Group 2 victory with Villermont in the Sandown Guineas (1600m) on Saturday.

Keeping count of All Too Hard’s winning run went into overtime two hours later at Cranbourne.  And anyone who clocked off would have missed Boom Chicka Boom putting five lengths on his rivals in the Highview Accounting Plate (1000m).

They were hung out to dry and jockey Jake Noonan reckons he’s only going to get better after the front-running victory.  “He’s still raw and doing it on ability alone.  I rode him like he was the best horse in the race and he won with authority – like we expected. 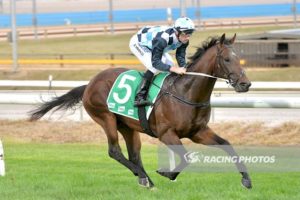 Boom Chicka Boom (3c All Too Hard – Stolen Beauty by Mossman) is trained by Mick Price for Queensland owner-breeder Michelle Lang-McMahon and he started a $1.26 favourite after going down a nose to Flash Cash (Pluck) on debut at Bendigo earlier this month.

“I spoke to Mick on Tuesday morning and we hoped there would be a bunny up front,” Noonan said.

“But he flew the gates from an inside draw and I decided to take luck out of the equation.  He will win in much better company with something decent to run down.”

She has been a revelation in the breeding barn for Lang-McMahon who represented Australia in show-jumping at the Olympics and nowadays operates the Kolora Lodge pre-training centre south of Brisbane with her husband Peter McMahon.

All Too Hard stands at Vinery and he has his second-season rivals down for the count this season with 23 winners of 31 races.  Boom, Boom!