Earlier in the day, Keep The Faith filly Ironore Gina had scored a front-running victory in the Bet365 Maiden (1112m) at Kyneton.

Cilauro struck twice at Stony Creek last season and had been around the money since resuming in September. “He could have led when they backed off the speed but I was happy to sit outside Crimson Tycoon,” jockey Lachie King said. “He’s fit and honest and was way over the odds ($31) tonight.

“We pinched a break in the straight although he did tend to float in front. He’s still a bit immature and there’s better things to come.”

Cilauro is a homebred for trainer Chris Diplock and is the first foal from NZ-bred mare Roma Joca (Pentire) who is related to Kaaptive Edition (G1 Ellerslie Sires’ Produce Stakes & G1 The BMW).

Master Of Design (Redoute’s Choice) stands at Greta West Stud for a $3,300 fee and he has Grand Design knocking on the door in Perth. She has been runner-up three time this season and can break through at Ascot on Wednesday for trainer David Harrison and Mt Hallowell Stud owner Craig Thompson.

“That was the plan,” Maskiell confirmed. “I sent a message to Natalie this morning saying we could jump and lead from the inside gate. She agreed and it worked out perfectly.

“I was confident we were never going to get run down and she feels like a progressive filly.”

Ironore Gina is a 3yo daughter of former Greta West sire Keep The Faith and is the fourth winner for Rustie Bugles (Toy Pindarri). She was bred by Karen Piergrosse and races for a syndicate that also includes Kaye & John Walsh, Ross Taylor and John Taylor-Prime. 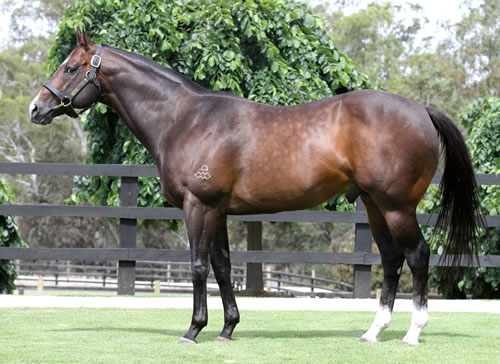