Kasharn kicked off a winning double for All American at Gosford on Thursday thanks to some clever tactics by apprentice Alena Skerritt.

Not happy with the early tempo, Skerritt spurred Kasharn to the front with a mid-race move to win by three lengths over 1600m.  It was his fourth victory for trainer Con Karakatsanis following priors at Canterbury and Grafton (2).

“That was a peach of a ride,” Karakatsanis said.  “Alena showed initiative because he’s the type of horse that likes to build momentum – it was no good being anchored back in the field.  And he really put them away in the straight.

“We’ve always known the ability was there but he was immature early on.  I knew we wouldn’t see the best of him until this preparation and we will stay at a mile next start in the New Year.”

Forest City Girl has a yearling colt by Smart Missile catalogued as Lot 29 at the Gold Coast Magic Millions on January 11.

All American 3yo Green Light appreciated the drop back from city tracks to win at Yarra Valley on Thursday.  Still in his first prep, the Peter Morgan trained gelding started a $2.80 favourite for the De Bortoli Maiden Plate (1512m) and duly saluted by a length.

Green Light is a homebred for Bruce & Jillian Mathieson.  His dam Cristallo (Testa Rossa) won at Moonee Valley and her first All American foal Green Card was a juvenile winner Ballarat & Caulfield before transferring to John Moore in Hong Kong.

The Mathiesons also race All American sprinter Zebulon who has been sidelined since winning the LR City of Adelaide Stakes last April.

All American (Red Ransom) has just completed his initial book at Geisel Park where he covered 114 mares at a $10,000 (plus gst) fee. 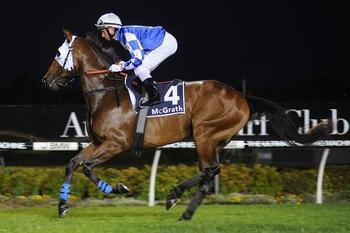