Vinery has consolidated its position among the leading vendors at the Magic Millions Yearling Sale after more rewarding results at the Gold Coast on Wednesday.

The Gold Coast Sale is a significant barometer at the start of the yearling sale season and Magic Millions Managing Director Barry Bowditch declared the figures indicated the industry is in great shape.

“It’s been an outstanding market so far,” Bowditch noted.  “We are talking big, big numbers.  Turnover is $10 million up on the same time last year and that was an all-time record.  The Magic Millions brand is going from strength to strength.”

Eagle Farm trainer Kelly Schweida has been a strong Vinery supporter at the Magic Millions and he had the final say on a well-bred son of Deep Field (Lot 190) that was first to parade on Wednesday.  The $240,000 colt is from a half-sister to Delectation (VRC Darley Classic Gr.1) and the dam of Artorious (MRC Blue Diamond Stakes Gr.1).

Schweida bought Stakes winning filly Miss Hipstar from Vinery for $150,000 at the 2020 Gold Coast Magic Millions.  The Star Turn 3yo is one of the outsiders for the $2million Magic Millions Guineas (RL, 1400m) but has been trained to the minute for the sales-related feature race on Saturday.

Kembla Grange trainers Robert & Luke Price were pleased when their Headwater filly Jamaea drew gate 8 for the Magic Millions Guineas on Wednesday morning.  She is a firm $5.50 favourite and the favourable draw saw her team in a buoyant mood hours later when paying $160,000 for Vinery’s Russian Revolution – Moretti colt (Lot 286).

“The boys liked him and you can’t go past the Vinery brand,” Rob Price said while signing the Magic Millions iPad at the back of the sale-ring on behalf of Jonathan Scully and Jamaea’s part-owners Bruce and Ken Noble.

A Vancouver colt topped the Vinery draft on Day 2 when agent Sally Williams bid $450,000 on behalf of Tony Fung Investments.  He is closely related to the Deep Field colt purchased by Kelly Schweida earlier in the session and kept bid-spotters busy with interest right around the complex.

“We loved him,” Williams said.  “But we weren’t the only ones because there were plenty of others on him.”

All Too Hard had a colt from Presslist (Lot 387) make $130,000 to Brett Thompson and minutes later the Vinery champion’s filly out of Proposal (Lot 394) sold for $240,000 to John O’Shea.  “She’s a quality filly and I rated her very highly,” O’Shea revealed.  “It’s a proven cross with More Than Ready and she fitted all our criteria.

“She’s powerful with a lovely action, deep girth and comes off a tremendous farm.  That’s the sort of filly I want to train.”

Hong Kong-based Denys Chan went for value when he paid $200,000 for Vinery’s Exceed and Excel filly from Queensland Oaks Gr.1 winner Pure Beauty (Lot 398).  She was the third-last lot to parade on Wednesday and joined a Chan shopping-list that included Vinery’s Dundeel filly from Day 1.

“I took a punt and hopefully she turns out to be a bargain buy.  I paid $600,000 for an Exceed And Excel filly last year and this one is a similar type.  The 2yo is named Ginger’s Gal and she won barrier trials at Randwick and Rosehill in October.

“She was getting ready for the Golden Gift but went shinny.  Bjorn (Baker) has a big opinion of Ginger’s Gal and will bring her back for Stakes races in the autumn.” 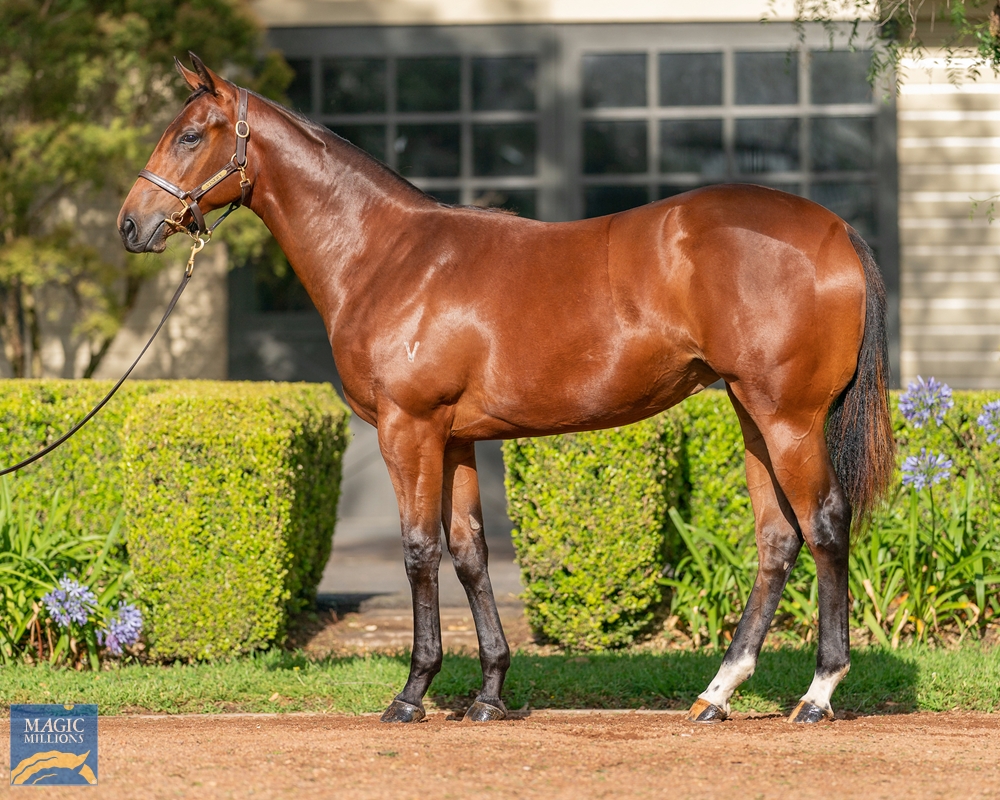