Demerit has opened up a big lead on the WA 2YO Sires’ premiership after his filly Revitup earned $88,000 for a four-length victory in the Tourism WA Trophy (1000m) on Saturday.

It was the easiest juvenile win seen so far this season at Ascot.  Trained by Dion Luciani for Loloma Farms, she had won on debut at Ascot in October before being claimed late by Man Crush (Manhattan Rain) in the Crystal Slipper Stakes a fortnight ago.

Revitup is leading the charge for former Taunton Vale sire Demerit (Lonhro) who died in July 2019.  His final crop also includes Pot Shot who won the season-opening Initial Plate at Belmont in October for Luciani and Loloma Farms,

“She jumps and runs and Holly (Watson) made use of her early speed,” stable spokesman Ian Glading said.  “She had it won on the corner.  I put down the glasses and came down from the grandstand.

“She has her moments at home but is a professional on race day.  She ran right through the line today.  It was a real good win.”

Revitup’s dam Regal Class (Al Maher) was bred by Peters Investments to win at Bunbury and Ascot during an autumn 3yo campaign in 2017.

Regal Class was purchased off the track for $15,000 at the 2018 Magic Millions Autumn Sale by Kent Johnston to bolster the broodmare band at Taunton Vale.  Following Johnston’s death in May 2019, she changed hands again and is now owned by Loloma Farms principal Kelly Everett.

Demerit has 65 live foals from his final crop and among them is the 2yo half-brother to Miss Vasari who also won on Day 3 of the TABtouch Masters.  She was a Pinjarra debut winner in February and was runner-up to Iseered Iseered at Ascot during an initial campaign earlier this year.

Miss Vasari (Rogano) is a homebred for Oakland Park and is closely related to G2 Karrakatta Plate winner No Questions (Xaar).  Her dam Miss Safari (Ferocity) has a yearling colt and a filly foal by All American. 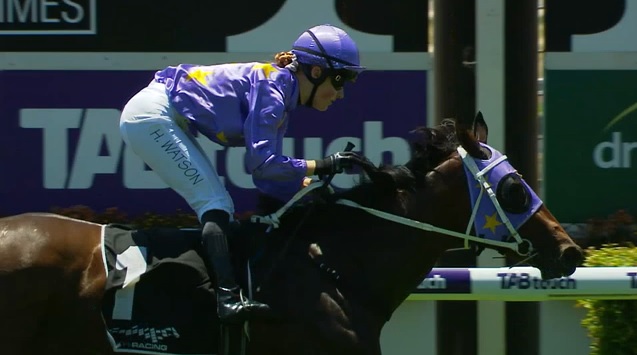