Day 1 of the Inglis Easter Yearling Sale was one for the ages at Vinery Stud with three millionaires at Riverside Stables and another graduate who just missed out at $950,000.

At the conclusion of Tuesday’s trade, Vinery had reached turnover of $6.53 million at an absolutely amazing session-topping average of $816,250.

Vinery and Champion sire Exceed And Excel combined to sell a couple of seven-figure colts before lunchtime on Day 1.  And both youngsters were purchased by Tony Fung’s Aquis Farm.

The first Exceed And Excel to change hands was a $2.10 million colt from Peace Force (Lot 5).  He set the standard for a sensational day and the background behind that transaction can be read here

Vinery followed up with an Exceed And Excel – Sanity colt (Lot 63) that made $1.05 million.

“They’re two fantastic colts and there was little between them,” Aquis Farm manager Shane McGrath explained.  “Like they say, ‘Drill for oil where oil has been found’.  The team loved both colts and they will be trained by Annabel Neasham.”

The Exceed And Excel – Sanity colt was sold (as agent) for Victorian-based A List Stud.  He’s the first foal of a winning sister to the dams of Gatting (VRC Makybe Diva Stakes Gr.1) and Manicure (MRC How Now Stakes Gr.3).

“I don’t think there would be too many farms that have had days like this one,” Vinery bloodstock manager Adam White said.  “We knew we had a great bunch of horses and it’s an extraordinary day for the whole team.”

The bidding started at $600,000 before Maher had final say on behalf of a colts’ syndicate.  “I saw him at the farm during Vinery’s inspections and he looked a real athlete,” Maher said.  “He has a beautiful temperament and a big page so was an obvious choice.  That means you expect to pay big money at Easter.”

Turbo Miss is a daughter of More Than Ready’s Golden Slipper Stakes Gr.1 winner Sebring.  The Snitzel colt is her first live foal following a career-high victory in the Frances Tressady Stakes Gr.3 at Flemington.

Vinery just missed a fourth millionaire graduate when the I Am Invincible – Snitzerland colt (Lot 89) changed hands for $950,000.  He was purchased by Coolmore Stud who were underbidders for the Exceed And Excel – Peace Force colt.

“He’s a quality colt with a deep pedigree,” Coolmore’s Tom Magnier said.  “We’re looking for colts with the potential to make stallions and our syndicate reckons he ticks all the boxes.  Chris (Waller) was very keen, too.”

Vinery’s fillies were also in demand.  Former Hong Kong trainer John Moore led the way with a daughter of Written Tycoon (Lot 210) that made $420,000.  She is the first foal from a from a winning half-sister to King’s Rose (NZ One Thousand Guineas Gr.1).

“They told me she was originally going to the Magic Millions in January,” Moore said.  “Written Tycoon is in vogue and I like the cross with Exceed And Excel.  She’s a very nice filly and I guess you have to go over the budget to buy the better types here.

“We’ve been blasted out of the water on a few yearlings today.”

There’s another 9 yearlings on offer from Vinery on Day 2 starting with the I Am Invincible – Champagne Harmony colt catalogued as Lot 247. 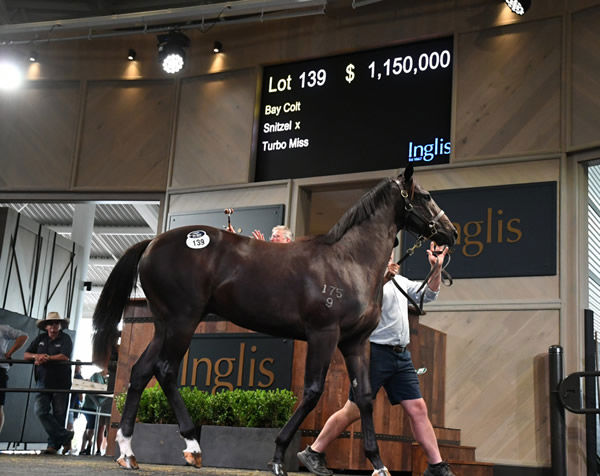