Vinery Stud set the bar super-high for the 2021 Inglis Easter Yearling Sale when its Exceed And Excel – Peace Force colt was knocked down to Aquis Farm for $2.10 million on Tuesday morning.

“We rated him the best colt here and, personally, I think he’s the best colt I’ve seen for a couple of years!” McGrath declared.  “He’s the benchmark.  He’s faultless.”

“Vinery is a great farm and hopefully this colt can go on and win a Group 1 like Farnan,” McGrath continued.  “He will end up being a cheap buy if he does.  He looks an early-running 2yo and we were impressed with his temperament and the way he handled all the attention.”

Vinery sold him as agent on behalf of breeders Steve McCann and Neil Werrett.  “He’s been a head-turner since he was a foal,” bloodstock manager Adam White said.  “He’s a stunning colt and we knew he would be popular.”

His dam Peace Force (Bernardini) was bought by Vinery for $520,000 at the 2016 Magic Millions National Broodmare Sale.  She has a filly foal by I Am Invincible and was covered by Exceedance in his first book at Vinery last year.

Exceedance continued Vinery’s Group 1 link with Exceed And Excel when he won the 2019 Coolmore Stud Stakes in their green and white silks.  He covered upwards of 140 mares first-up at a $38,500 service fee.

Exceed And Excel (Danehill) was raised at Vinery and he carried the ‘Big V’ brand to a Group 1 victory in the Coolmore Stud Stakes before embarking on a stud career that has totalled 182 Stakes winners to date. 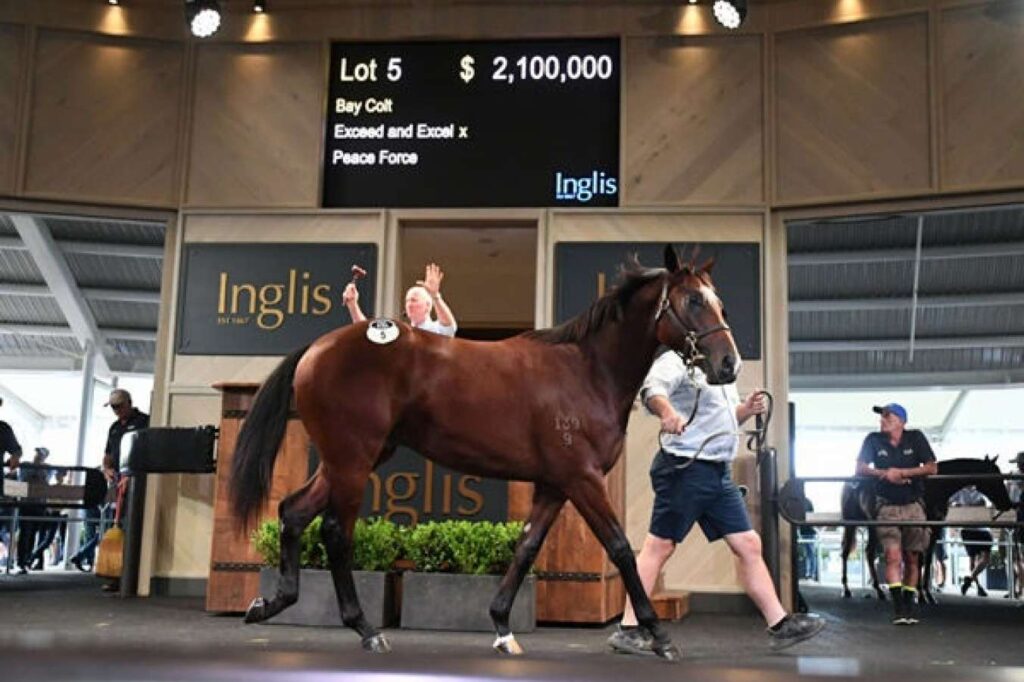 Exceed And Excel colt sells for $2.10 million to Aquis Farm