More Than Ready’s final Australian foals are arriving around the country and his current 3yo crop are getting mobile for spring stakes in Sydney and Melbourne.

The Vinery legend covered 100 mares last year and the ASB reports his first foal of the season is a filly from Highgrove Stud mare Fracture (Fastnet Rock).  Highgrove’s Ron and Debbie Gilbert bred last year’s Breeders’ Plate Gr.3 winner Global Quest who is also by More Than Ready out of a mare by Fastnet Rock.

“We sold Global Quest to Aquis Farm for $340,000 at the Gold Coast Magic Millions,” Gilbert recalled.  “We don’t usually stay in anything that we sell as a general rule but Aquis Farm asked if we wanted a keep a share and luckily we made an exception.”

Global Quest was a hard-held third at the Warwick Farm trials last Friday and the Chris Waller-trained colt holds a Group 1 entry for the Golden Rose on September 26.

Randwick trainer Ron Quinton produced a black-type prospect at Randwick on Wednesday when his More Than Ready 3yo filly Orpheum won at her first start on a good track.  She had finished fourth on debut in the Gimcrack Stakes Gr.3 at Randwick last October.

“She’s always had a bit of ability but lost her way on a heavy track last time,” Quinton said.  “She put her best foot forward today and I’m sure the owners will want me to run her in a decent race now.”

Orpheum is a homebred for the Kelly family of Newhaven Park.  She’s the first foal of Sydney winner Tender (All American) who also earned minor black-type in a Dequettville Stakes LR in Adelaide.  It’s the family of blueblood Coolmore Classic Gr.1 winner Kapchat (Centaine).

In Melbourne, trainer David Brideoake reports his More Than Ready 3yo filly Jenni’s Rainbow took no harm from her slogging fourth at Moonee Valley last Saturday.  She had produced a brilliant finishing burst to win on debut at Pakenham but had to be ridden upside down second-up in the heavy conditions.

“Her recovery rate was exceptional and we haven’t lost any confidence going forward,” Brideoake confirmed.  “The weather really deteriorated after we saddled her up and she did an outstanding job under the circumstances.”

An immediate program isn’t set in stone for Jenni’s Rainbow although the Thousand Guineas Gr.1 at Caulfield on October 10 is still her long-term goal.  A Sandown 3yo Benchmark is one option for her next start and connections are also considering the Cap D’Antibes Stakes LR at Flemington on September 12.

Hoofnote:  More Than Ready’s champion mare Rushing Fall stole the show in the Diana Stakes Gr.1 at Saratoga last Sunday and the victory also overshadowed his promising 2yo winner Caldee.

Caldee (2f More Than Ready – Holiday’s Jewel by Harlan’s Holiday) opened the Group 1 meeting with a six-length runaway over 1700m.  She broke alertly and was kept under a snug hold before strolling clear in the straight.

A homebred for Shortleaf Stable’s John Ed Anthony, Caldee had finished fifth on debut on dirt and obviously preferred the change to turf under Javier Castellano.  She is eligible for the Breeders’ Cup Juvenile Fillies Turf Gr.1 at Keeneland on Friday, November 6. 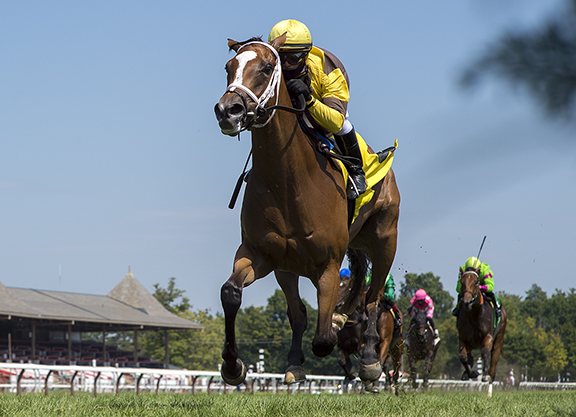