Behemoth has thrown down the gauntlet to Melbourne’s spring stars with an authoritative victory in the Memsie Stakes Gr.1 at Caulfield.

Saturday’s weight-for-age sprint traditionally opens the Group 1 calendar in Victoria and the heavyweight son of Vinery sire All Too Hard signalled his carnival credentials for trainer David Jolly and jockey Craig Williams.

Behemoth tracked a quick clip set by Vinery graduate Begood Toya Mother before peeling off his heels and accelerating to a comfortable win over Mr Quickie and Glenfiddich.  “That was just brilliant,” Jolly said from his home-base in South Australia.  “When he landed in the right spot I thought he would be hard to beat.

“We haven’t over-taxed him and he certainly wasn’t screwed down for today.  I told Craig to be aggressive from an inside gate and it worked out so well.  I would have loved to have been there.”

Behemoth was going to continue his spring prep from the Denistoun Park stables of Jason Warren on the Mornington peninsula but Jolly has elected to take him back home.  “There’s nothing wrong with staying over but there’s easy access to the beach here and he’s a good traveller.  We aren’t too sure whether to run him in two or three weeks and we can probably make a better call on that from here.”

All Too Hard sired the 600kg giant from Flemington stakes winner Penny Banger (Zedrich) and the Memsie prizemoney sent his earnings north of $1.32million for Grand Syndications. It was his third attempt at the elite level after weighing in for the last two Goodwoods at Morphettville.

Breeder Linda Monds loved Behemoth from Day 1 at Tyreel Stud.  “He was absolutely one of the biggest foals we’ve had and he also had such a big personality,” she recalled.  “It just proves once again that Group 1 winners can come in all shapes and sizes.”

Behemoth is the second Group 1 winner for All Too Hard following Alligator Blood and the Vinery sire is now second on the Australian sires’ table behind Snitzel.  He will consolidate second spot behind the reigning champion if Behemoth continues his hit-and-run strike-rate at the Caulfield carnival.  He has firmed into TAB favouritism for the Rupert Clarke Stakes ($4.50) and Toorak Hcp ($6) worth a combined $1million. 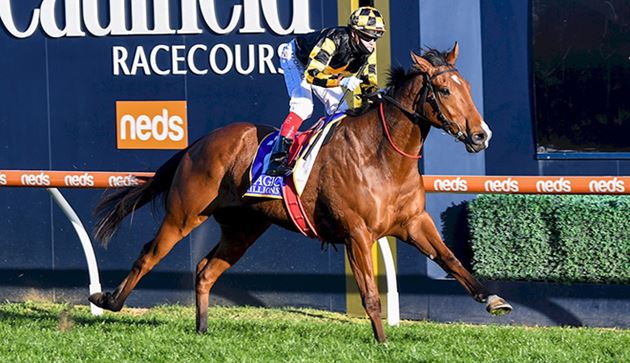