Blackfriars sires Playing God and God Has Spoken won a combined $2.85 million for Colin Loxton and Neville Parnham during their racing careers and the same owner-trainer combination were back in business with the full-brothers at Ascot on Wednesday.

Playing God completed a stable double with the Parnham-trained Wakan Tanka in the Crown Perth Hcp (1400m).  Earlier in the day, God Has Spoken 3yo Ghost Who Walks had broken his maiden in the Western Racepix (1100m).

Wakan Tanka isn’t regarded as one of our most genuine gallopers – his only other win in 35 starts was at Northam in May 2019 – but, to their credit, punters who backed him from $9 into $5 were finally compensated at the midweek meeting.

“He’s been frustrating,” Parnham admitted.  “He’s been working the place down but hasn’t delivered.  I decided to try him at 1400m and sitting on the pace was the place to be today.  Hopefully, there are more wins in him now.”

Wakan Tanka (5g Playing God – Horrorvism by Oratorio) was purchased by Loxton for $38,000 at the 2017 Perth Magic Millions.  His dam is an unraced full-sister to LR Challenge Stakes winner Private Dancer and she foaled an I’m All The Talk filly in August.

Ghost Who Walks is still in his initial prep and had excuses at his first two starts before powering home on Wednesday.  “He’s a promising type,” Parnham explained.  “He was slow to step first-up here in September and then made up good ground after being caught wide at Northam last time.

“He drew a good gate today but was on-and-off the bridle and has more to learn.  I’ve trained three by God Has Spoken and they’ve all won including this one’s older brother Holy Ghost.”

Ghost Who Walks (3g God Has Spoken – Death Knock by Lonhro) is a homebred for Loxton and his dam is a winning half-sister to Raido (LR GCTC Goldmarket Hcp).  She has a 2yo filly by Playing God. 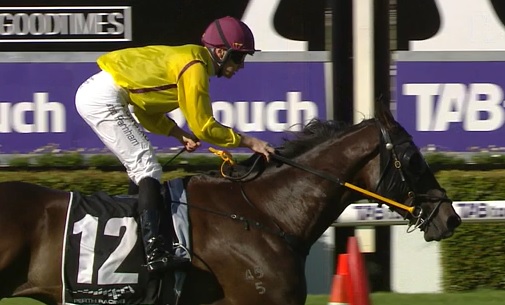