That’s Funny Az notched Snippetson’s first win for 2021-22 in the Ngawyni Stakes (1400m) at Belmont.  The 5yo front-runner survived a searching first-up test after being pressured all the way down the straight.

The Scenic Lodge resident sired 60 individual winners in Australia last season culminating with exciting 2yo Wuhan Warrior in the final midweeker at Belmont.

The wins spanned the start of the foaling season and Snippetson was first to alert the night crew at Muchea with new arrivals from Secret Minx (So Secret) and High Romance (Commands).

“That’s Funny Az is extremely tough,” winning jockey Brad Parnham said after the Ngawyni.  “A couple of times we looked like getting beaten.  I was riding hard a fair way out because he keeps giving and he held on gamely.”

That’s Funny Az won his maiden as an autumn 3yo at Bunbury and raced through the grades at Ascot during a subsequent prep earlier this year.  “He was held back by gastric ulcers but we always knew he had ability,” trainer Dion Luciani said.  “I wasn’t all that confident first-up over 1400m and he didn’t trial, either.

“That’s earned him a start in the Goldfields.  He will step up to 1600m here in a fortnight and, all going well, head to Kalgoorlie.”

Luciani mentioned the Coolgardie Cup (1760m) on September 3 as the first target for his first start out of town.  There’s $500,000 prizemoney plus bonuses on offer for the Boulder Cup, Hannan’s Hcp and Kalgoorlie Cup.

“We’ve got options and at this stage, I’m thinking the Coolgardie Cup and a freshen-up for the Hannan’s.  We will be considering the Boulder and Kalgoorlie Cups, too.”

That’s Funny Az is the final foal of Scenic Lodge homebred Scenic Fair (Scenic) who won the LR Matchmaker Classic at Ascot in 2010.  He cost a Loloma Farms partnership $17,000 from Scenic Lodge at the 2018 Perth Magic Millions. 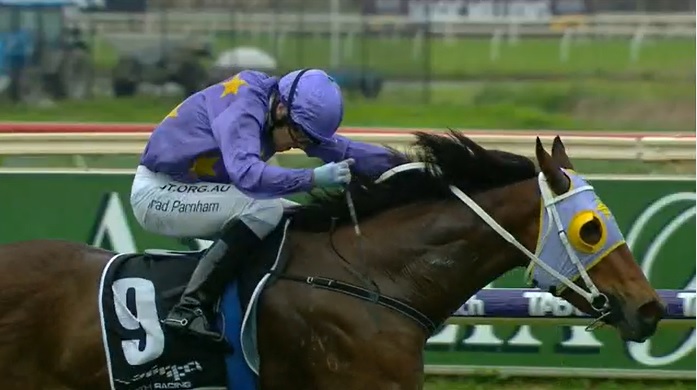