In its brief history, the G1 Golden Rose had eluded Arrowfield Stud stallions until Snitzel 3yo Trapeze Artist scored a longshot victory on Saturday.

The Gerald Ryan-trained colt led home Champagne Cuddles and Menari to land a sensational Golden Rose trifecta for Snitzel and Not A Single Doubt.

The $1 million race over 1400 metres was a triumph for “Mr. Snitzel”, Gerald Ryan, trainer of both the favourite Menari and Trapeze Artist, who slipped off the punters’ radar and started at 40/1.  A Group 3 winner and Group 1-placed at two, Trapeze Artist left no doubt about his class when he overcame a wide barrier to romp home by more than lengths.

Ryan has now trained 13 stakes winners by Snitzel, they have won 31 Group & Listed races, and the Golden Rose is his second Group 1 victory with a Snitzel following Snitzerland’s victory in the 2014 Lightning Stakes at Flemington.

Trapeze Artist is Snitzel’s 12th individual Group 1 winner and the result was the second Arrowfield-sired Group race trifecta in a fortnight, after the G2 Run to the Rose won by Menari from Pariah (Redoute’s Choice) and Perast (Snitzel).

Trapeze Artist is raced by Bert Viera who paid $190,000 for the Domesday mare Treppes in foal to Snitzel from Edinburgh Park at the 2014 Magic Millions National Broodmare Sale.  Two years later, the yearling Trapeze Artist was passed in for $300,000 at the Inglis Easter Sale – a disappointment that was well and truly forgotten as Vieira celebrated his first Group 1.

Treppes is a non-winning member of a distinguished family that includes the Woodlands Stud graduates Crawl, Marching & Gait, and descends from 1971 Golden Slipper winner Fairy Walk.  Go back another four generations and there’s Raphis, one of the several full sisters to Phar Lap that have extended his family’s influence into the 21st century.

Eight other stallions have broken through the $1 million mark, including Not A Single Doubt, who holds down sixth spot with just over $1.2 million. 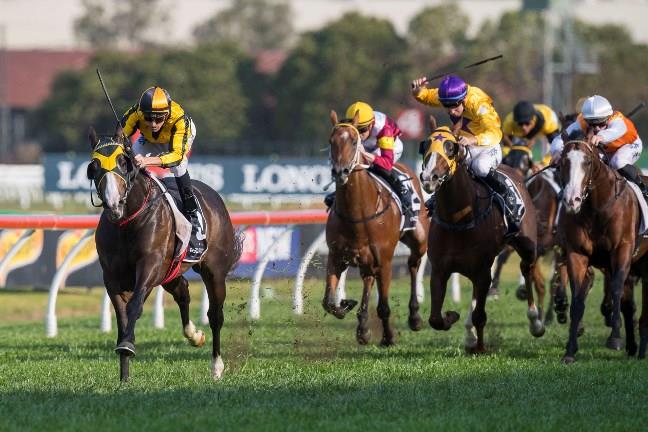