It was their first win since the departure of David Hayes to Hong Kong and it also added another notch to the remarkable run of Vinery freshman Headwater who has now sired 11 individual winners this season.

Stormborn jumped a $2.30 punters-elect first-up in the Racing.com Maiden Plate (1000m) following an eye-catching summer campaign.  She sat three-wide outside the leaders but was always travelling like a short-priced favourite for Dan Stackhouse.

“Fantastic.  A 100% strike rate,” Ben Hayes laughed when interviewed after the three-quarter length victory in a quick 58.33s.  “I would like to say we planned it that way but that’s just how it worked out.

“She was very quick before weakening during her first prep.  She was caught wide today but Dan kept her in a nice rhythm.  It was an excellent ride and she was strong to the line.  We will be looking to take her through the grades into the city.”

Stormborn (2f Headwater – Quick’s the Word by Shamardal) had been placed on debut at Flemington on New Year’s Day and then took off with an astonishing midrace sprint at Moonee Valley on the Australia Day long weekend.  She clocked a quicker sectional than Hey Doc in the (Gr.2) Australia Stakes that night before compounding in the straight.

Offered by Holbrook Thoroughbreds at the 2019 Inglis Classic Sale, she was passed-in for $80,000 and now races for a syndicate managed by Nick Tzaferis.

Quick’s the Word began her racing career with a winning hat-trick for Bjorn Baker and there’s juvenile black-type under second-dam Catchfire (Century) in the Maribyrnong Plate Gr.2 and Debutante Stakes Gr.3.

Catchfire is also a half-sister to the second-dam of Headwater.

Headwater (11 winners) is pressuring Spill The Beans (12) at the top of the Australian first-season winners’ table.  He’s been on fire in recent weeks having sired a half-dozen winners since Ashra Jahre scored on June 16. 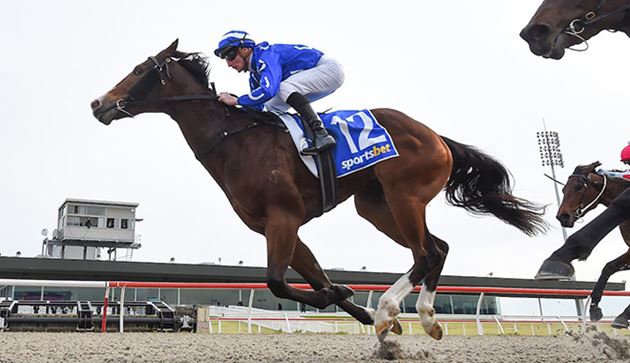