He’s Gold firmed from $15 into $7 and didn’t give his supporters any cause for concern during a free-wheeling victory in the Morley Growers Market Plate (1200m) at Ascot on Saturday.

Taken straight to the front, the 2yo chestnut stretched out like a horse with a future for trainer Ted Martinovich and a partnership managed by his daughter Simone Moloney.

He’s Gold (2g Rogano – Rue de Marengo by General Nediym) had also been backed from $8.50 into $3.80 when runner-up in his previous start at Pinjarra but made amends with an easy victory over Almaher Man (Gingerbread Man) and his stablemate Diamond Blue (Awesome Rock).

“Diamond Blue beats him on the track but he brings out his best on race day,” Martinovich said.  “He probably wasn’t entitled to run second at Pinjarra but fought on really well.  And with natural improvement, he went a lot better today.”

He’s Gold was bred by Ted’s late wife ‘Pie’ and is a son of former Oakland Park sire Rogano.  His dam Rue de Marengo won twice in the Goldfields and she’s a half-sister to Accardo (G3 NZ Darley Plate).

“He got lost up straight at Pinjarra but raced like a professional today,” jockey Mitch Pateman reported.  “He pinged the gates and then pricked his ears and relaxed.  He quickened at the 600m and I knew he would be mighty hard to beat.”

Simone and the other part-owners; Nick Giorgetta, Rob Mitchell, Glyn Evans & Wayne Forrest pocketed $41,300 in prizemoney and the total collect increased to $82,000 with the addition of bonuses from Westspeed Platinum.

Connections of Diamond Blue also received a bonus now that Westspeed Platinum pays out on placegetters.

He’s Gold is nominated for the G2 Karrakatta Plate (1200m) at Ascot on April 3 and is priced at $16 in pre-post markets by the WA TAB.  Martinovich won his first Karrakatta with Hold That Smile (Haulpak) when it was Group 1 in 1988 and he doubled up with Lucy Mae (Stratum) in 2017.

Rogano (Redoute’s Choice) was purchased by Dave Powrie in April 2019 and is now based with Tracey Bannister at Boallia Farm in Vasse.  He’s a full-brother to deceased Arrowfield Stud champion Not A Single Doubt who currently leads the Australian sires’ premiership with earnings over $12.84 million. 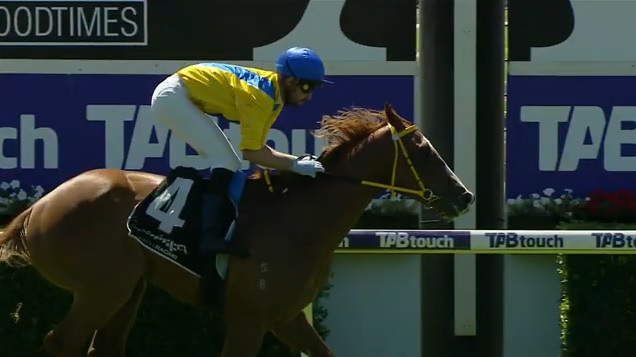