King Of Prussia unearthed a late bloomer when Hochadel bolted in at Seymour on Thursday.

The 5yo gelding was facing the starter for just the second time in the Height Insurance Maiden (1200m) after a promising debut at Bendigo last month.

Cranbourne trainer Rhiannon Schiffer, who races the winner with Tim Kirwan, was bubbling with excitement when he returned to scale.  “He wasn’t broken-in until he was a 2yo and has had issues.  He’s taken a lot of work but it’s all been worth it now.

“We’ve always known he had ability and people like Mick Kent and Robbie Griffiths have helped,”

Schiffer added.  “So have the vets at Advantage Equine and Ben Thompson who is suspended and couldn’t take the ride today.”

Hochadel was bred by Greta West Stud’s Laurie & John McCarthy using their evergreen sire King Of Prussia over No Blushing (Dolphin Street).  The dam is a daughter of Flemington stakes winner No Mischief (Listed VRC The Vanity).

No Blushing has another King Of Prussia named Under No Prussia with trainer John Ledger and a 2yo colt by Greta West sire Keep The Faith. 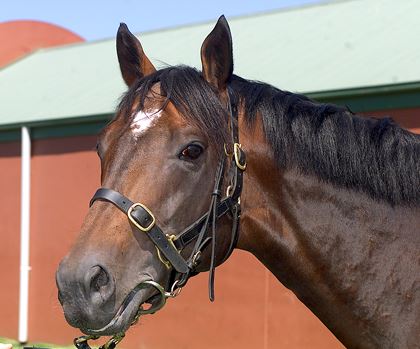 Jockey Matt Allen rode Hochadel at Geelong and he was confident a long way from home.  “He was tightened at the start but he’s a big horse and squeezed through .  From there it was smooth sailing and I knew he would be hard to beat.

“He does everything right and should go on with it from here.”

King Of Prussia (pictured) has his G3 Bellmaine Stakes winner Prussian Vixen stepping up her spring campaign in the Strathmore Community Bendigo Bank Stakes (1200m) at Moonee Valley on Saturday.