Rosemont Stud-bred Sky King became the biggest horse win in Hong Kong this season when he monstered a restricted sprint field at Happy Valley on Thursday.

Sky King weighs the equivalent of 590kg and that’s even heavier than champion galloper Able Friend who tips the scales at 582kg.

Trainer Caspar Fownes is hoping the youngster’s massive frame doesn’t get in the way of what could be a productive career.  “Hopefully, he’s straightforward because he’s a good doer and will eat us out of house and home if there’s too many setbacks.  He will be at his best over a mile and, if he stays sound, we will have a bit of fun.”

Sky King (Jet Spur) raced as Sky Spur in Australia and won by three lengths on debut at Ipswich before shipping off-shore in November last year.  “A lot of big horses can handle Happy Valley and he did trial well here, so that wasn’t a worry,” Fownes added.  “Ollie (Doleuze) said the inside draw helped and so did the drop in grade.”

His dam Gold Lottey (Encosta de Lago) was a Group 3 winner at Flemington & Moonee Valley and was sold off the track as a five year-old mare for $390,000.  Fast-forward to 2012 and she was a snip for Rosemont owner Anthony Mithen at $64,000.

Gold Lottey was carrying Sky King and Mithen sold him to Kenneth Kwan for $130,000 at the 2014 Gold Coast Magic Millions.  The mare’s most recent foal is a yearling colt by Rosemont resident Toorak Toff.

Mithen reports Nostradamus has settled straight into his new digs at Gnarwarre.  “If there’s a stallion letting down better after 6 day’s retirement, we would be surprised!”

Splendid Eagle was another bargain at $75,000 during the 2013 Magic Millions National Sale.  Mithen elected to retain her yearling filly by Toorak Toff and her Starspangledbanner colt will be a standout at any of the majors in 2017. 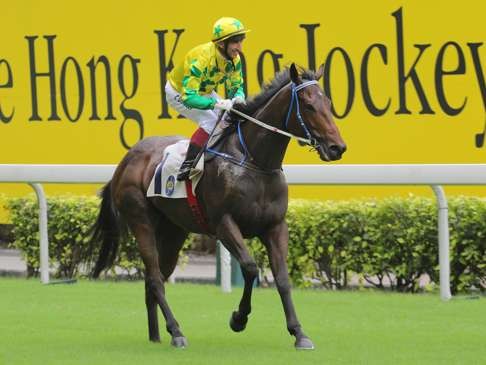