A lively ladies syndicate celebrated overtime after Six Carat scored a longshot victory in the TABtouch Plate (1100m) at Ascot on Saturday.

Six Carat’s connections cashed in with a $31 pay-out on the TAB and they also divided $82,000 in prizemoney and Westspeed Premium bonuses.  The Demerit filly was a well-beaten fourth on debut last month although there were excuses according to trainer Paul Jordan.

“She wasn’t really switched on and she also got galloped on around the home turn,” he revealed.  “But sometimes it just clicks for them and she got a beautiful run into the race for Craig (Staples) today.”

Six Carat was an $85,000 buy for Jordan out of the Taunton Vale draft to the 2020 Perth Magic Millions.  “It’s terrific for the girls.  She was one of the last deals that Harvey Crossman put together before he passed away.  Craig Thompson bought a share for his wife Rose, Harvey’s wife Nina is also in the syndicate and so is my wife Laura.”

They have been dubbed ‘Desperate Horse Wives’ and are among 26 all-female syndicates eligible for a $75,000 bonus over and above $250,000 in prizemoney for the Magic Millions WA 2YO Classic RL at Pinjarra in February.

“She relaxed and railed up beautifully in the straight,” Staples reported.  “This means a lot.  Harvey was special to me and this is special for his family.”

Six Carat is bred to be good being a younger sister to 2018 G3 Gimcrack Stakes winner Agent Pippa and $472,500 earner Double Digit.  Their dam Female Agent (Commands) has a yearling filly from Demerit’s last crop with Nina Johnston at Taunton Vale and there’s also a Sessions filly on the ground at Dardanup.

Demerit doubled up later in the day at Ascot with Point Taken in the Glenroy Chaff Hcp (1400m).  The 5yo mare is trained by Jim Taylor for his wife Tina, his mother Lois and the Castledine family.

Point Taken took a while to get mobile and didn’t win her maiden until a rising 4yo at Northam but in the last six months she has added city wins at Ascot (2) and Belmont (2).  Her older sister Kiss Bang Love won the 2017 G3 Gimcrack Stakes at Ascot and her first foal is a colt by Trapeze Artist with Victorian breeder Rob Crabtree.

Their dam Vacillare (Trade Fair) has a 2yo Demerit filly that failed to make a $50,000 reserve at the 2020 Perth Magic Millions. 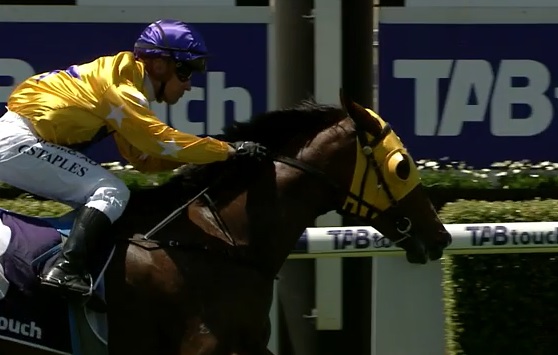