Bred back when Clangalang stood at Eliza Park Stud, the veteran mare came from the back-half of the field to snatch a narrow win in a four-horse finish.  “The pace set the race up for us and she travelled right through the run,” apprentice Mitch Aitken said.  “The gaps opened and I knew she was going to get there.

“Her last win was in this race 12 months ago so it’s just a big thrill for all of us – she’s honest and tough.”

The McPhees have a trophy cabinet full of Wodonga Cups and they added more silverware in March with Toolangi (Towong Cup) and Baby Jack (Corowa Cup).  They all carried the family’s Jacka Investments colours of black & pink checks.

“We bred our own and you get very attached,” Helen said.  “John looks after which stallions our mares go to and I look after the names.”

Like all their horses, Minnie Downs is prepared by Brian Cox and the second Swan Hill Cup sent her earnings to $445,085.  Her dam Bush Beauty (Dieu D’Or) won five races at Wodonga but only delivered two foals before being put down at 15.

Trained by Gerald Ryan, Clangalang was a Group 1 winner of the AJC Derby and AJC Epsom Handicap at Randwick before standing at Eliza Park Stud until 2010.  A transfer to South Australia for stints at Rivers End Stud and Willow Grove Stud was followed by a move to GG Horse Stud in Tasmania.

Clangalang (Clang) crossed Bass Strait after his tough gelding Geegees Blackflash was named Tasmanian Horse of the Year.  The star stayer is owned by Paul and Elizabeth Geard and they bought his sire to stand at their property in Broadmarsh where he covered 20 mares last year. 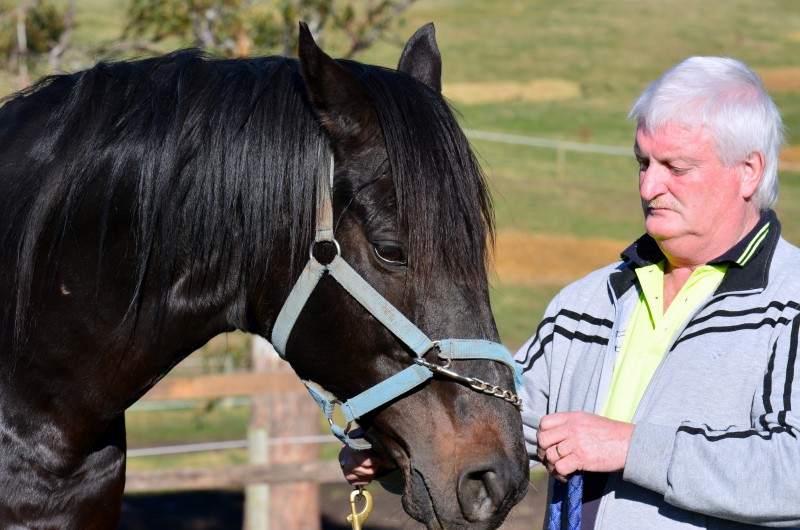