The brother to Group 1 Mossman mare Plucky Belle is destined for Hong Kong after making $150,000 at the Magic Millions National Yearling Sale on Tuesday.

Offered by Tartan Fields, the colt was the only Mossman for sale and was purchased by Nick Columb on behalf of the Hong Kong Jockey Club.  He finished third on the Day 1 leader-board during an otherwise disappointing opening session when the clearance rate barely reached 62%.

“He’s a November foal and still immature but that suits us because he will be educated and won’t be offered again until the 2020 Hong Kong International Sale,” Columb explained.  “He’s a clean-legged, athletic colt and not unlike Plucky Belle.

“Mossman has a hot young sprinter named Ivictory in Hong Kong.  He’s a Group 1 winner already and by 2020 could be a Hong Kong Horse of the Year.”

Apart from Plucky Belle, the colt (pictured below) is a half-brother to Redoute’s Choice Group 1 placegetters Rawnaq and Light Brigade.  Their dam Winning Belle won the 2004 Queensland Guineas Gr.2.

“We had shares in Mossman at Vinery and he’s been a speed influence and a great investment for buyers over many years,” Tartan Fields breeder Hamish Esplin said.  “They win at two and keep racing on year after year.

“We bred Plucky Belle and she won a Coolmore Classic Gr.1 as a six year-old.  Bringing her younger brother here was a terrific endorsement of our decision to wait until the National Sale.  His x-rays and scope were perfect.”

Mossman had not long turned 22 when he was pensioned last year.  There are 17 foals on the ground from his final season at Vinery. 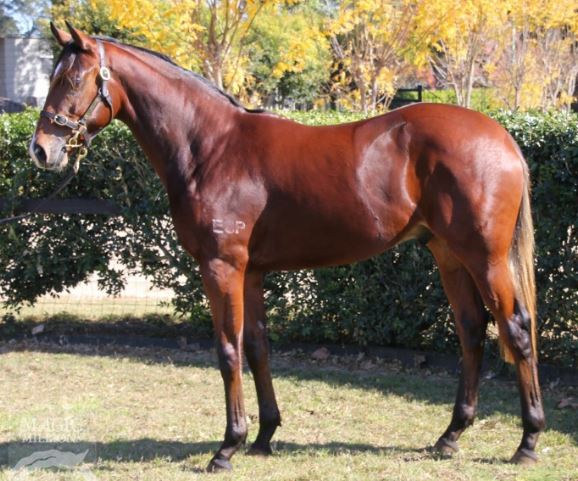