Swettenham Stud has announced multiple Group 1 winner Mshawish (USA) will be joining its stallion roster in 2017.

A coup for Victorian breeders, Mshawish is the highest-earning entire of champion sire Medaglia d’Oro and will shuttle to Swettenham Stud in partnership with Al Shaqab and Taylor Made Farm in Kentucky.

Swettenham Stud owner Adam Sangster has forged a relationship with the Qatari racing organisation, having outstanding stallion Toronado at his Nagambie farm for the last two years.

Together, they raise the bar to another level.

“Mshawish represents another top-class stallion to come to Victoria,” Sangster said.  “This is indicative of the confidence and strength of the Victorian industry when international entities like Al Shaqab and Taylor Made are willing to send stallions the calibre of Mshawish.

“We have had great support for Toronado from Australian breeders so I’m really excited to present Mshawish to them.  He’s a lovely type of stallion with the physical presence we all look for when choosing a mating.  Being the pre-eminent son of Medaglia D’Oro just caps it off.”

Mshawish began his career with trainer Mikel Delzangles in France, breaking his maiden as a spring 3yo at Saint-Cloud over 1600m.  He followed up with an improving second in the G3 Prix de Guiche (1800m) at Chantilly before stepping up for Group 1 fourths in the French Derby and St. James Palace Stakes.

At four, Mshawish captured the G2 Zabeel Mile at Meydan before another fourth in the G1 Dubai Duty Free.  He was then transferred to Pletcher winning the LR El Prado Stakes and G2 Fort Lauderdale Stakes leading into a Group 1 breakthrough in the Gulfstream Park Turf Hcp.

Returning for his final campaign in 2016, Mshawish captured the G3 Hal’s Hope Stakes and then farewelled the USA with a powerful victory in the G1 Donn Hcp

The phrase “like father, like son” was spot on when Mshawish emulated Medaglia d’Oro who won the Donn in 2004.  He’s the most accomplished son of Medaglia d’Oro and joins Horses of the Year California Chrome and Wise Dan as the only North American males to win Group 1 races on dirt and turf in the last decade.

Medaglia d’Oro (El Prado) was tough and durable himself and his progeny show that he passes on that resilience.  His Australian sons at stud include Group 1 young guns Astern (Darley) and Vancouver (Coolmore).

“Mshawish always impressed me with his versatility, high-cruising speed, and neat ability to also have an exciting turn of foot,” Pletcher said.  “He was top-class and I look forward to training his babies a few years down the road.”

Mshawish (7h Medaglia d’Oro – Thunder Bayou by Thunder Gulch) retired with 9 wins from 24 starts and earnings of over AUD 3.10 million.  He’s from the immediate family of Champion USA 2YO Filly Halfbridled and is currently covering his first Kentucky book for $20,000. 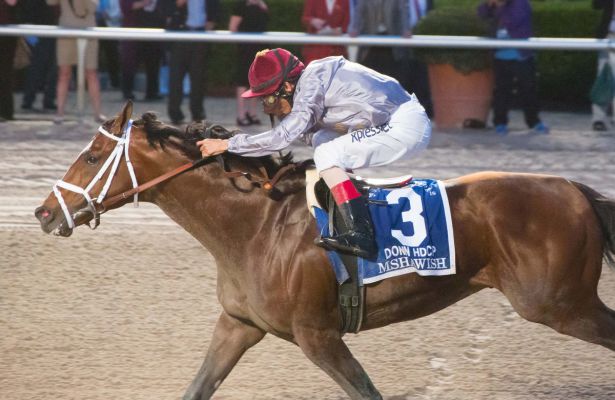