First-season sire My Admiration filled out a quinella when Dawn Armada defeated Apparition in the TABTouch Plate (1400m) at Belmont on Wednesday.

Dawn Armada is trained by David Harrison for Serpentine owner-breeder Alan McAlister and she ranged up to the favourite Jedaffair at the furlong to score by a length with something in hand.  Apparition was well out of his ground on the home turn before finishing better than anything else into second spot.

My Admiration stands at Westbury Park in Pinjarra and he’s the only WA freshman to have sired three individual 2yo winners this season.  Harrison also prepares his recent Ascot winner Cryptic Love.

“The speed was on and everything worked out perfectly,” Harrison said.  “She travelled well and rolled into the race at the right time.  She’s still immature but has potential and will be a nice filly in six months.”

Harrison will confer with McAlister before deciding whether Dawn Armada will go for a spell or have one more run on a Saturday.  He mentioned the G3 WA Champion Fillies Stakes (1600m) as a likely target in November.

Pat Carberry was riding the winner for the first time and expects her keep improving over further ground.  “I stoked her up coming to the corner and had them covered half way down the straight.  She started to float in front but was holding them easily on the line.”

Dawn Armada (2f My Admiration – Delicate Snip by Snippets) is a half-sister to Dawn Approach (LR Miss Andretti Stakes) and Delicate Miss who won for the sixth time at Ascot last month.

They all carry the McAlister family’s white and green colours as did G1 Winterbottom Stakes winner Magnifisio.  He’s part of the syndicate that stands My Admiration along with Westbury Park owner Phil Ibbotson, Alan Olive, Graham Daws and Kevin Berry.

My Admiration is a son of Encosta de Lago from a stakes winning three-quarter sister to Wandjina.  He made $625,000 at the 2009 Inglis Easter Sale and was a top-class sprinter-miler in Hong Kong winning the G2 Chairman’s Trophy and placing in the G1 Classic Mile. 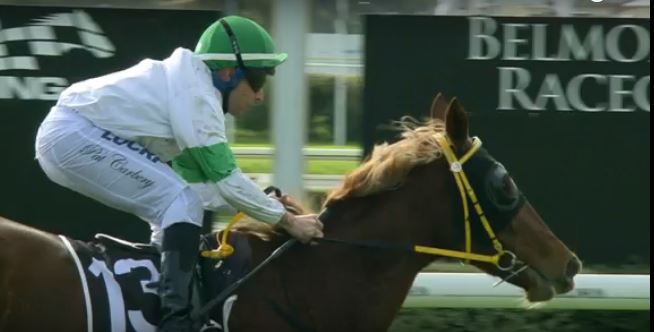