Victoria’s spell of pouring rain has our breeding grounds saturated but no-one is complaining in the north-east of the State.

Blue Gum is busy with its stallion roster of Canford Cliffs, Turffontein, War & Glass Harmonium and the stud’s mares have also foaled some beautifully-bred babies this season.

Viking Turf Belle has a 2yo colt by Sebring that cost Tony McEvoy $340,000 from Blue Gum at this year’s Inglis Melbourne Premier.

“Royal Missile is above average, that’s for sure,” Miller said.  “It’s good to see her do that heading into the summer carnival.  My main mission this time in is to get some black-type and I think she can.”

Campbell is also upbeat about the prospects of his Group 1 stallion Glass Harmonium (Ire).  He was test-bred to a handful of mares in 2013 and has a half-dozen ready to race this season.

“Mike Moroney and John McArdle are very happy with their Glass Harmoniums,” Campbell said.  “He had speed over a middle-distance and never knew when he was beaten.”

Glass Harmonium was initially trained by Sir Michael Stoute in England and won a Yarmouth nursery by 4 lengths before adding a Group 3 in the Gordon Richards Stakes at Sandown.  He transferred to Mike Moroney for a local career topped by a Group 1 triumph in the Mackinnon Stakes (2000m) at Flemington.

An eye-catching grey stallion, he is a son of Verglas who won the G2 Coventry Stakes at Royal Ascot before embarking on a successful shuttle career between France and Western Australia.

There were 6 stakes winners by Verglas in WA topped by 2008 Champion Fillies winner Spirited One.

Glass Harmonium appeals as one of Victoria’s value-for-money stallions at a $6,600 (inc gst) service fee. 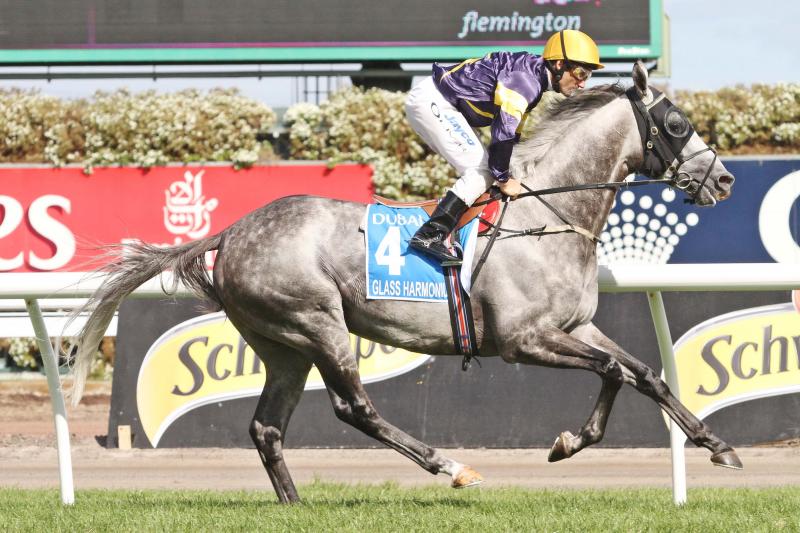