Cranbourne trainer Grahame Begg secured a bargain when he bid $220,000 for a More Than Ready (USA) filly at the Inglis Melbourne Premier Yearling Sale on Sunday.

“No more nicer filly.  She was my top-rated filly for the Sale,” Begg declared.  “She’s absolutely gorgeous and is from an outstanding Group 1 family.”

The More Than Ready – Luluoru filly (Lot 67) was bred and sold by Milburn Creek’s John Muir.  She’s a half-sister to recent Doomben winner Jack The Lad and her USA family goes back to 2005 USA Champion 3YO Colt Afleet Alex.

She changed hands just a few hours before the Vinery legend sired his 214th Stakes winner in Japan.  His 3yo colt Jaen Gros was untroubled scoring first-up in the Marguerite Stakes (LR, 1200m) at Hanshin under legendary jockey Yutaka Take.

Jaen Gros had won a Hanshin nursey in November and Nisai Stakes at Chukyo before a winter break.  He’s a full-brother to Tom’s Ready who was More Than Ready’s 160th stakes winner in the 2016 Woody Stephens Stakes (Gr.2, 1400m) at Belmont Park.

More Than Ready’s final Melbourne yearlings consigned by Vinery included a colt destined for Singapore.  Catalogued as Lot 94 from Miss Belief (Snitzel), he was purchased for $130,000 by trainer Stephen Gray and Wattle Bloodstock for Copper Belt Stables.

“We’re off the mark in style with a More Than Ready at Oaklands,” Wattle Bloodstock’s Peter Twomey said.  “He’s a forward first foal out of a winning Snitzel mare and he looks like a flyer.”

A Russian Revolution – Butters (USA) filly topped the Vinery draft at $300,000 on Monday.  She was purchased by trainer Ciaron Maher fresh from a Group 1 with Vinery filly Marabi in the Oakleigh Plate.

Russian Revolution (Snitzel) graduated from Vinery at the 2015 Inglis Easter Yearling Sale and won the 2018 renewal of the Oakleigh Plate before embarking on a very promising stud career.  “She’s a very athletic filly and Vinery is a Group 1 farm,” Maher’s bloodstock manager Will Bourne said.

“The stallion is going very well with black-type at the Magic Millions and in Sydney as well as the Blue Diamond Prelude winner in Melbourne.”

The Vinery team will now focus on the 18 yearlings being prepared for the Inglis Australian Easter Sale at Riverside Stables on Tuesday & Wednesday, April 5 and 6. 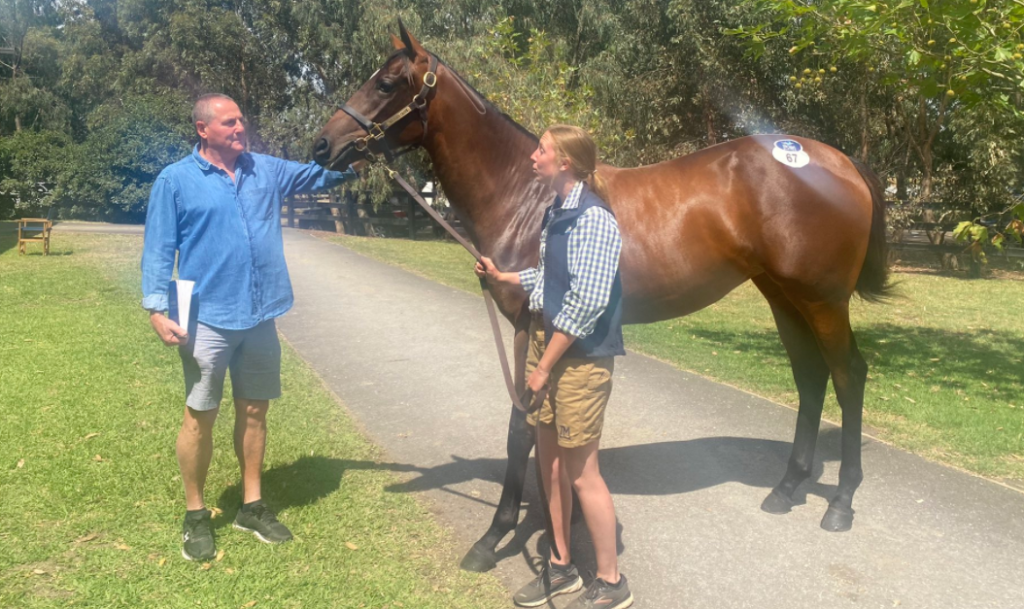 Grahame Begg and his More Than Ready filly at Oaklands