Penny On The Queen left it late to land a betting move in the Belhus Racing Stables Hcp (1200m) at Ascot on Saturday.

After being specked in from $12 to $7, the 2yo daughter of Universal Ruler burst through a pocket in the straight to get the better of Loopy’s Baby (Gingerbread Man).  She had been placed behind Saintorio on debut at Belmont and had excuses when midfield behind the same horse at Ascot earlier this month.

“She was bolting before the gap opened and finished super,” trainer Ash Maley said.  “She has an awesome turn of foot – even when I’m aboard in the mornings.

“We won with her older half-sister (Jenabel) and she was a nice little filly at last year’s Magic Millions,” Maley recalled.  “She was only going for $10,000 so I put my sisters into the partnership.  The girls are pretty rowdy today.  They had been involved in Own The Dream and they’re having a ball.”

Penny On The Queen is one of five winners from Kensington Gem (Blackfriars) who is a half-sister to Market Price (G2 Blamey Stakes).  Another of her half-sisters Precious Stone (At Talaq) is the dam of Kia Ora Miss (LR Belmont Oaks) and the grand-dam of Kia Ora Koutou (LR WATC JRA Trophy).

Kensington Gem is back in foal to Universal Ruler and his cross with Blackfriars mares has a 67% winning strike-rate.

“She let down nicely first-up although she was pretty green,” winning jockey Lucy Warwick said.  “I didn’t ride her any good last time and expected to get the sack.  I was surprised when Ash rang to book me again and he told me to ride for luck from the wide draw.

“When the run came, she was very professional and didn’t even think about driving through the gap.” 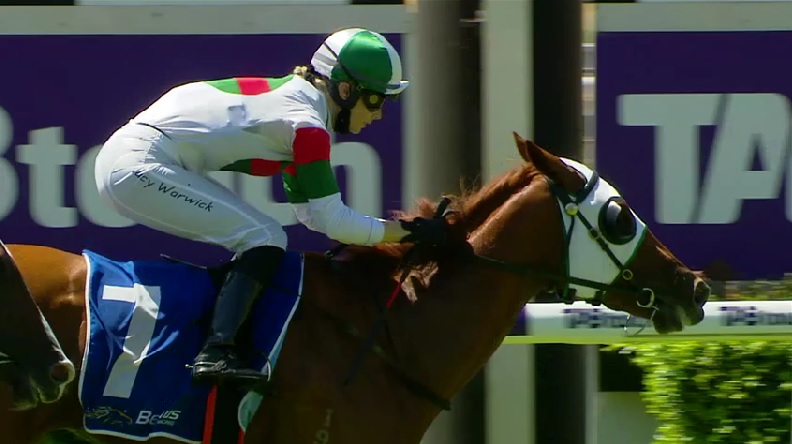 PENNY ON THE QUEEN