Jimmy Choux (NZ) has a second Group 1 in his sights this season after Melbourne-based sprinter Open Minded won the LR John Dillon Stakes (1400m) at Caulfield on Australia Day.

Open Minded ended the unbeaten run of imported mare Lighthouse (USA) after getting away with some easy sectionals under Damien Thornton.  The dominant all-the-way victory improved his record to 9 wins in 18 starts and over $443,365 in prizemoney for a syndicate that includes NZ breeder Tim Harrison.

Trainers Anthony & Sam Freedman will set him for the G1 Orr Stakes (1400m) at Caulfield on February 12.  “He’s a horse that has gone to a new level,” Anthony Freedman said.  “It was his biggest test but he’s race-fit horse and he passed muster today.  His rating will go up again and the 1400 at Caulfield will suit in the Orr Stakes.”

Open Minded (5g Jimmy Choux – Hidden Passion by Desert Prince) is half-brother to Prince of Passion (Castledale) who was runner-up in the G1 Thornden Mile of 2017.   Harrison retained him after bidding failed to reach a $50,000 reserve at the 2018 NZB Karaka Yearling Sale.

Class mare Two Illicit had notched Jimmy Choux’s first Group 1 of 2021-22 after overcoming a wide barrier draw in the Captain Cook Stakes (1600m) at Trentham last month.  She is raced by her Trelawney Stud breeders Brent and Cherry Taylor.

Co-trainer Robert Wellwood rated it a super win by a very good mare.  “I just can’t believe it and certainly won’t be forgetting this day anytime soon,” he said.  “The draw was always the niggle, but Danielle (Johnson) gave her a wonderful ride and had her in a lovely rhythm.

“She really deserved this Group 1.  She has always had the ability but has had a few soundness issues that have held her back, but everyone has done a massive job and we’re very proud.”

Two Illicit continued her current Group 1 campaign with a placing in the Zabeel Classic (2000m) at Ellerslie on Boxing Day and a close-up sixth in the Thornden Mile (1600m) at Trentham yesterday.

Jimmy Choux (Thorn Park) has a pair of colts from Dawson Stud and Gold Front Thoroughbreds catalogued for the Perth Magic Millions next month.  They are members of his first crop conceived at Roselee Park in Serpentine following a transfer from New Zealand in 2019. 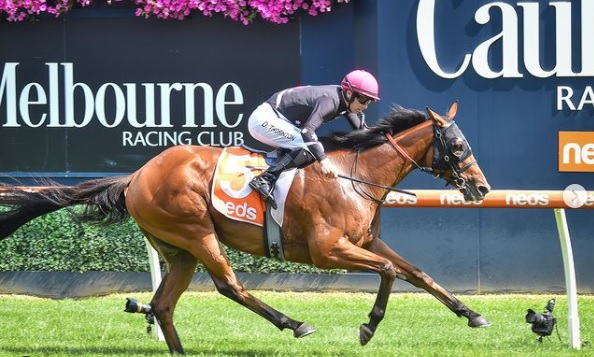