Blackfriars had won 7 WA sires’ premierships in a row when he died in December 2017 and he will make it a Perfect 10 titles at the end of this month.

The Scenic Lodge champion is as dominant as ever and he can stretch that sequence even further in the seasons ahead.  He won’t have a 2yo crop as from 2021-22 but juveniles have never been a point of difference during the record-breaking winning streak.

Carnamah is a case in point.  He cost $95,000 at the 2018 Perth Magic Millions and was given plenty of time to mature at Bellarine Peninsula Agistment Park by trainer Matt Cumani and managing part-owner Peter Diamond.

The 3yo gelding was runner-up on debut at Ballarat on June 11 and returned to the synthetic surface on Sunday for a comfortable victory in the PipePro Drilling Plate over 1500m.

“It’s good to get his maiden win second-up,” Cumani said after the one-length victory over Cambridge Stud 3yo Kanzai (Savabeel).  “It was a great ride by Johnny Allen and we’re looking forward to seeing him out over some distance.”

Carnamah’s dam Amazingtale (Tale Of The Cat) wasn’t sighted in two starts as a spring 3yo when trained by Keith Mifflin but she has foaled five winners from as many to race since retiring to Alwyn Park in Serpentine.  Her 2yo filly Tell Me Lies (Trade Fair) is working up to a debut for trainer Alan Matthews and owner Kerry Erceg.  And she has a weanling colt by Awesome Rock before being covered by Alwyn Park sire Maschino last year.

Blackfriars had sired Divine Shadow to win his second city race this prep on Saturday for trainer Brett Pope.  The consistent 4yo was bred and sold by Scenic Lodge for $30,000 at the 2017 Perth Magic Millions.  “That pays Brett back for his last-start loss,” jockey Mitch Pateman admitted at Belmont.  “I dropped him behind the speed today and he showed a good turn of foot to put it beyond doubt.”

Divine Shadow’s dam Idyllic Doll (Scenic) is a half-sister to Group 1 racehorse and sire Playing God (Blackfriars).  Her most recent foals are a Blackfriars 2yo filly named Miss Voodoo with Jason Miller and a Blackfriars colt to be trained by Fred Kersley after being knocked down for $67,500 at this year’s Perth Magic Millions. 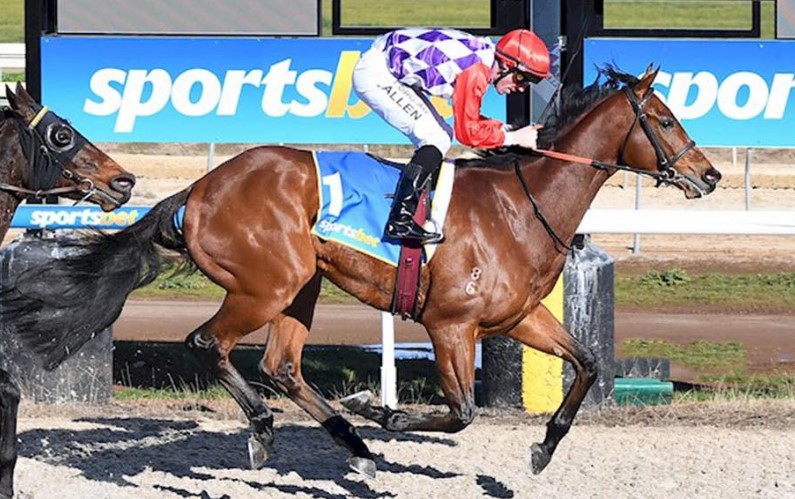