Flying mare Marabi and star colt Artorius are a dream-team in anyone’s language but Greg Perry isn’t shouting the odds ahead of Melbourne’s feature sprints.

The Vinery partner knows there’s a myriad of pitfalls between a Group 1 dream and a Group 1 dais.  So do bookmakers and they’re not taking any chances with Perry’s pair of aces.

Marabi is a red-hot $2.40 favourite to maintain her unbeaten record in the G1 Oakleigh Plate (1100m) at Caulfield on February 26 while Artorius is being kept safe at $9 for the G1 Newmarket Hcp (1200m) at Flemington on March 12.

Perry bred and retained Marabi after she encountered issues with her feet as a youngster.  She’s a daughter of Champion sire I Am Invincible and is one of five winners from Nakaaya (Tiger Hill) including G1 VRC Oaks (2500m) winner Aristia (Lonhro).

Perry operates under the Greenwich Stud banner and apart from Aristia, his other Group 1 winners include Atlantic Jewel, Commanding Jewel, Johnny Get Angry, Delectation and Artorius in the 2021 Blue Diamond Stakes.

He sold Artorius at 2020 Gold Coast Magic Millions and kept a share in a syndicate managed by Newgate Farm’s Henry Field.  Trained by Anthony & Sam Freedman, the Flying Artie colt resumes in the G2 Rubiton Stakes (1100m) at Caulfield next Saturday, February 12.

Artorius joined Farnan (Golden Slipper Stakes) and Exhilarates (Magic Millions Classic) in a Vinery triumvirate of feature juvenile winners in last year’s Blue Diamond and the Scone stud has another 27 yearlings entered for the Inglis Classic Sale starting this Sunday.

The first as agent for Greenwich Stud is the Pierro – Pussycat Dream colt (Lot 178).  “He’s not overly big but is very strong and is from a mare who won her only start at two in England,” Perry said.  “The mare has already thrown a Singapore Stakes winner and Pierro gives the colt a 4×4 cross with Straight Strike.”

The Pride of Dubai – Contango Miss colt (Lot 477) is another product of Perry’s in-depth pedigree analysis involving former Vinery shuttler Congrats (A.P. Indy).  “I have a theory about the sex-bias of his progeny.  About 90% of the Congrats Stakes performers are fillies and that could prove useful as broodmares.”

Perry sold the first foal from Contango Miss, a Rubick filly, to Bendigo trainer Josh Julius at last year’s Classic Sale.  “She was on our short-list during inspections at Vinery.” Julius recalled.  “Then we wanted her more and more after arriving at Classic.  The reports during her education were very positive from our breaker Ben O’Farrell.”

The Greenwich Stud fillies start with the All Too Hard – Champagne Ready (Lot 454).  “I like her and I have a feeling the family will keep developing,” Perry predicted.  “The dam is a three-quarter sister to Grace And Harmony who won the (LR) Gold Bracelet at the Gold Coast.”

The All Too Hard – More Than Ready cross is another factor having already combined for Group 1 winners Forbidden Love (ATC Surround Stakes) and Wellington (HKJC Chairman’s Sprint Prize).

“I have a soft spot for More Than Ready and his fillies are worth their weight in gold,” Perry continued.  “I sent six mares in his last book down here and we sold a colt to Gerald Ryan for $220,000 at the Magic Millions last month.”

Perry has two fillies by the Vinery legend entered for the Classic Sale.  The More Than Ready – Demanding Miss filly (Lot 495) is a half-sister to Tepario (Pierro) who won the last of her four races in the Greenwich Stud silks at Canterbury twelve months ago.  She’s in foal to Frosted (USA) off a September 1 cover last year.

“The filly goes back to Angst and I’ve got a bit of time for that family.  Same as the More Than Ready – Royal Flute filly (Lot 716) who somehow didn’t make the main sale.  I’m already exposed to her family and you can’t keep them all.”

Vinery’s Classic Sale consignment is stabled in Barn I at Riverside Stables. 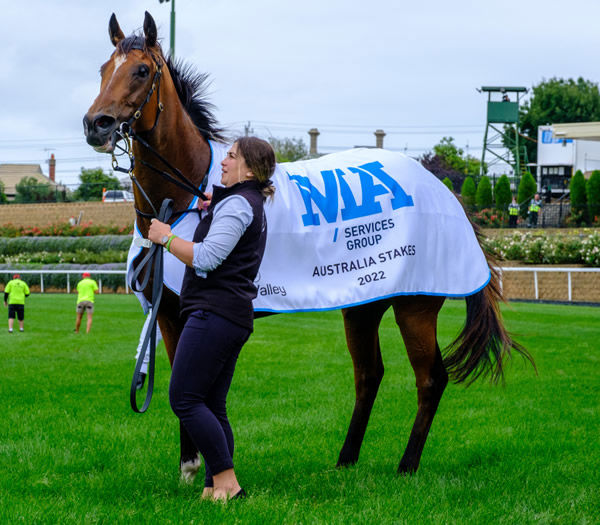