Playing God has landed a combination counter-punch of stakes winners ahead of the Perth Magic Millions Yearling Sale this Thursday and Friday.

The Darling View Thoroughbreds sire was laid low by colon surgery in November but that’s been alleviated to a degree by his rising star Ex Sport Man and experienced campaigner Platoon this month.

Ex Sport Man bankrolled his connections for a return visit to the Magic Millions Sale with strong finish in the RL Magic Millions 2YO Classic at Pinjarra on February 6.  And Platoon signalled he’s back in form with another black-type strike in the LR Cyril Flower Stakes at Ascot on Saturday.

The Darling View team is hoping Playing God will return to normal stud duties in 2021.  He had covered 96 mares in the spring prior to being hospitalised.

In the meantime, Darling View’s Atwell family will be heartened with the response to his yearlings during pre-sale inspections in the Swan Valley.

Geisel Park owner Eddie Rigg and stud manager Conor Dunlop were especially pleased when Group 1 miler Platoon set up a possible interstate campaign on Saturday.  Depending on travel restrictions, trainer Neville Parnham could send him east for the G2 Blamey Stakes at Flemington on February 27.

His full-sister (pictured) will be a highlight of the Geisel Park consignment during early trade at the Magic Millions on Thursday.  The Playing God – Oriel (Oratorio) filly has been catalogued as Lot 39.

“She’s a gorgeous filly and the feedback has been very positive,” Dunlop said on Monday morning.  “They unloaded her from the float just as Platoon was winning at Ascot.  We were doing cartwheels.”

Perth has never been a focal point for pin-hookers until Mungrup Stud dispersed it’s new-season yearlings in August.  Among them was Platoon’s sister and Rigg had to pay $80,000 to take her home to Myalup.

“John Chalmers and the Magic Millions boys gave her the tick of approval and we haven’t regretted it for a minute,” Dunlop continued.  “In the six months since then, she has really furnished and it adds a bit of spice to our draft.”

The Playing God – Oratorio combination has a 73% winning strike-rate and there’s a nice type named Perfect carrying that cross in Singapore.  Trained by Dan Meagher for Buffalo Stable, he came from last to win at Kranji on Saturday.

There were 28 yearlings by Playing God that changed hands at the Mungrup Stud Dispersal and, apart Platoon’s sister, there were another half-dozen pin-hooked by the following buyers for Book 1 at the Magic Millions. 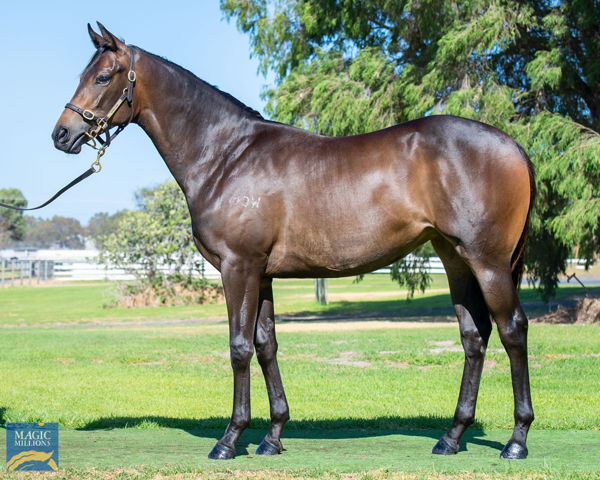