Strait of Dover set a track record while scoring a one length victory in the G1 Canadian Queen’s Plate (2000m) at Woodbine on Sunday.

Strait of Dover (3c English Channel – Bahrain Star by Danzig) is trained by Danny Vella and he clocked 2.01.99s which bettered the old mark set by Pachattack in the 2010 Maple Leaf Stakes.

The 153rd Queen’s Plate winner is from the first crop of Lane’s End stallion English Channel (Smart Strike) who reached a career-high in the 2007 Breeders’ Cup Turf at Monmouth Park.

Strait of Dover is raced by Canyon Farm owner-breeders Wally and Terry Leong and he was coming off a Listed victory in the Marine Stakes at Woodbine on May 12.  His older sister Starlite Strike won the LR Northlands Oaks in 2007.

This Queen’s Plate is the oldest continuously run race in North America but its future is under a cloud following news that Woodbine could be closed.  Woodbine Entertainment Group CEO Nick Eaves said its future depended on funding from the Ontario Lottery and Gaming Corporation (OLG).

“Earlier this year, the Ontario government made the decision to arbitrarily cancel the commercial contracts between our racetracks and the OLG,” Eaves said in the lead-up to the Queen’s Plate.  “The cancellation will devastate the province’s horse racing and breeding industry.  The Queen’s Plate and day-to-day racing are in jeopardy.”

The Slots at Racetrack program has added over $14 billion to the Provincial Treasury since its inception in 1999, with Woodbine’s facilities contributing approximately half of that amount.  However, the program was recently cancelled, as the province’s current gaming strategy does not include horse racing.

Ontario premier Dalton McGuinty has indicated the racing industry ought to be self-sustaining.  “But under the OLG Modernization Plan, the government holds a monopoly on all other forms of gambling,” Eaves explained.  “How are we expected to compete when the referee is also our opponent?” 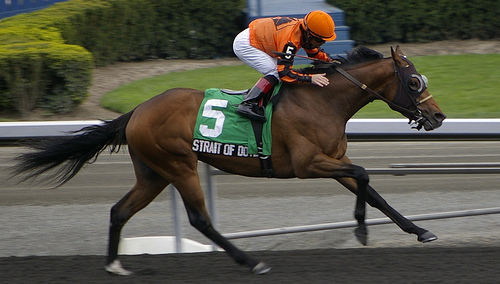