Mithen went the distance as a buyer and vendor at Riverside Stables while his stallion Shamus Award delivered knock-out Group 3 victories in Melbourne and Sydney.

The Rosemont Victorian Alliance has been active at the majors this year targeting stallion prospects but their 11th and final buy was knocked down for $1.20 million.  Even though the Snitzel – Bulbula colt (Lot 227) was offered at the tail-end of Day 1, Mithen and bloodstock agents Suman Hedge & David Redvers had to fight off some intense competition before landing the final bid. 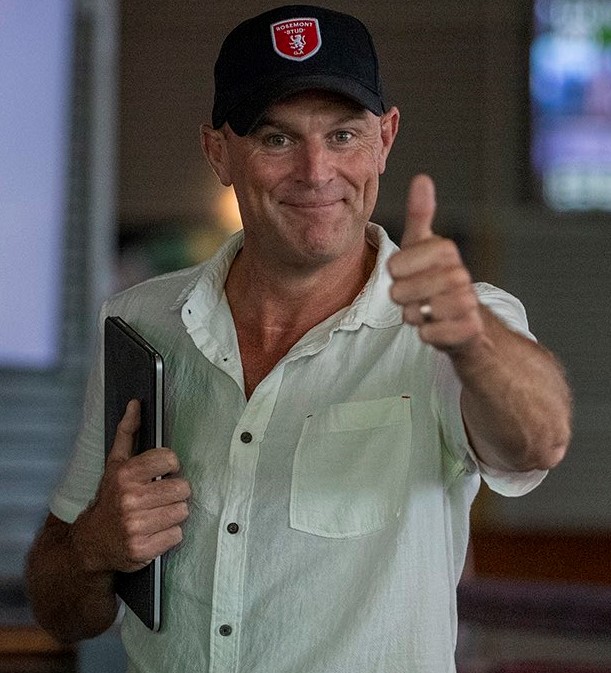 “There were high-fives and handshakes all-round,” Mithen (pictured) said with just the hint of a smile that masked the relief of a battle well-won.  “He’s a lovely colt with a fast pedigree and we thought he was the best Snitzel on the grounds this year.

“He’s among the last of the Shadwell yearlings to be offered here and it’s an honour and privilege to take him back home to Victoria.  I’m sure he will do Shadwell proud.”

The Snitzel colt (Lot 227) comes from a flying juvenile family out of Melbourne.  He’s a half-brother to Aryaaf (G3 Ottawa Stakes) and their dam Bulbula (Shamardal) won a LR Merson Cooper Stakes.

The Victorian Alliance also purchased a Written Tycoon – Shaaheq colt (Lot 77) for $200,000.  He’s another Shadwell-bred youngster from a Redoute’s Choice mare who won the G3 VRC Thoroughbred Breeders Stakes in 2010 and was runner-up to Star Witness in the G1 Blue Diamond Stakes that year.

Their third buy was the I Am Invincible – Beat the Benchmark colt (Lot 213) that made $525,000.  He’s the first foal from a New York black-type winning mare who was also Group 1 placed in a Natalma Stakes.

Mithen also signed for an I Am Invincible – Heart Of Thrills filly (Lot 333) on the Rosemont account after going to $1.20 million.  She’s a half-sister to Thrillster (LR Atlantic Jewel Stakes) from the family of Spendthrift Australia sire Swear and G1 Hong Kong Sprint winner All Thrills Too.

“We thought she was the filly of the sale and there were some very smart judges on her,” Mithen said.  “I thought she could perhaps go for as much as $2 million.  That would have been beyond our maximum so I’m delighted to buy her.”

Rosemount recouped that selling 6 yearlings for $1.14 million topped by a Redoute’s Choice colt (Lot 190) bought by Ciaron Maher Bloodstock for $350,000.  His dam Amanpour (Northern Meteor) won a G1 Queen Of The Turf Stakes

Next best were a pair of Shamus Award colts sold (as agent) for $180,000 to the bids of trainers Danny O’Brien and Henry Dwyer.

Jockey Hugh Bowman believes the Edward Cummings-trained Duais can make the necessary improvement to double up in the G1 Australian Oaks (2400m).  “She is strong, she can stay and she settled well today,” Bowman said on Saturday.  “She joined in when I asked her to and she showed a lot of fight when she needed to.  And, she’s trained by a Cummings.”