San Padre, a winning son of Teofilo, will start his stud career at Grandview Thoroughbreds in Melbourne this month.

His owner Peter Fusca has raced many successful horses with trainer Mick Kent and decided to retire San Padre after an ongoing leg injury restricted his career as a four and five year-old.  Fusca operates Grandview Thoroughbreds which is located just north of the Oaklands sales complex at Mickleham.

San Padre (6h Teofilo – San Cristobel by Fastnet Rock) topped the first day of the 2013 Melbourne Premier Sale making $250,000 from Tyreel Stud.  “He is a cracking colt and there is a lot of Fastnet Rock about him,” Kent said after outbidding Gai Waterhouse.  “I paid more than I wanted but I just love him.”

His dam San Cristobel (NZ) broke two milestones for her sire Fastnet Rock.  She was his first winner when successful Bendigo in October 2008 and she also foaled his first winner as a broodmare sire when Donna Madeira (Henrythenavigator) led all the way at Sandown in January 2013.

Tyreel’s Scott Holcombe wasn’t surprised the colt sold so well at Oaklands.  “He’s an absolutely smashing colt and a horse with a super nature – every good judge was on him.”

Holcombe also noted the resemblance to Fastnet Rock.  “He and Donna Madeira both have the Fastnet Rock head.” 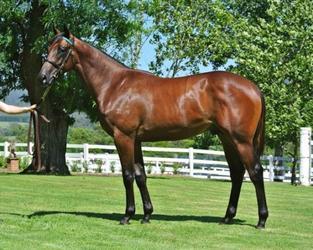 San Padre (pictured as a yearling) won on debut at Sale over 1717m as a spring 3yo and stepped straight up to stakes company for his next three starts culminating with a respectable 6th in the G1 Victoria Derby won by Preferment.

Fusca was disappointed the racing public never saw the best of him.  “He was hampered by a suspensory after the Victoria Derby and he’s too nice a horse to keep racing if he couldn’t show his full potential.”

“There’s 15 mares booked in and I would be happy to negotiate a price for any breeder interested in sending a mare.”  Fusca can be contacted on 0408 171 924.