Sheeza Belter has validated the 2yo form out of Perth with a stunning one-length victory in the G2 Brisbane Sires’ Produce Stakes (1400m) at Eagle Farm.

A barnstorming winner of the RL Magic Millions WA Classic (1200m) in February, she rocketed home to overhaul Swiss Exile (Pariah) and Brereton (Zoustar) on Saturday.

Sheeza Belter (2f Gold Standard – Saxabelle by Saxon) was transferred to Peter & Paul Snowden in March by a Justin Warwick-managed syndicate that has now banked $841,100.  Champion Perth jockey Willie Pike followed her to Sydney weeks later and he produced a perfectly-timed ride from six lengths off the speed well into the straight.

“She was the dominant 2yo in Perth so full credit to Justin for sending her across,” Paul Snowden said.  “She wouldn’t have seen too many wet tracks over there and she didn’t appreciate the Heavy 10 first-up for us in the (G2) Percy Sykes at Randwick.

“We took our time floating her up to Queensland.  She settled in at the Gold Coast and ran a good third in the (G3) Ken Russell.  When the races were cancelled last week, it was a no-brainer to come here today.  We had to pay the late-entry but that means absolutely nothing now.

“Willie didn’t move on her until they straightened.  That’s the key.  She has a tremendous turn of foot and it was a very good win.  She’s had a good preparation and is only going to come back bigger and stronger next season.”

Sheeza Belter was bred by Mt Hallowell Stud owner Craig Thompson and was sold to Warwick for $50,000 after initially being passed-in at the 2020 Perth Magic Millions.  He raced her sire Gold Standard and her dam Saxabelle who is a half-sister to the dam of Stakes winners Special Reward, Showy Chloe and El Rijes.

It was Mt Hallowell’s second Sires’ Produce Stakes victory in a year.  Thompson won the WA version in April 2021 with his homebred filly Hoi An (Longma).

Gold Standard (Sebring) won a G2 Stan Fox Stakes (1200m) at Rosehill and Sheeza Belter is from his first crop conceived at Spendthrift Farm in Victoria.  He was put up for sale following the recent closure of Spendthrift and was purchased by Widden Stud last week.

Widden will stand Gold Standard at its Victorian-base near Mt Macedon after beating offers from several studs including one from WA. 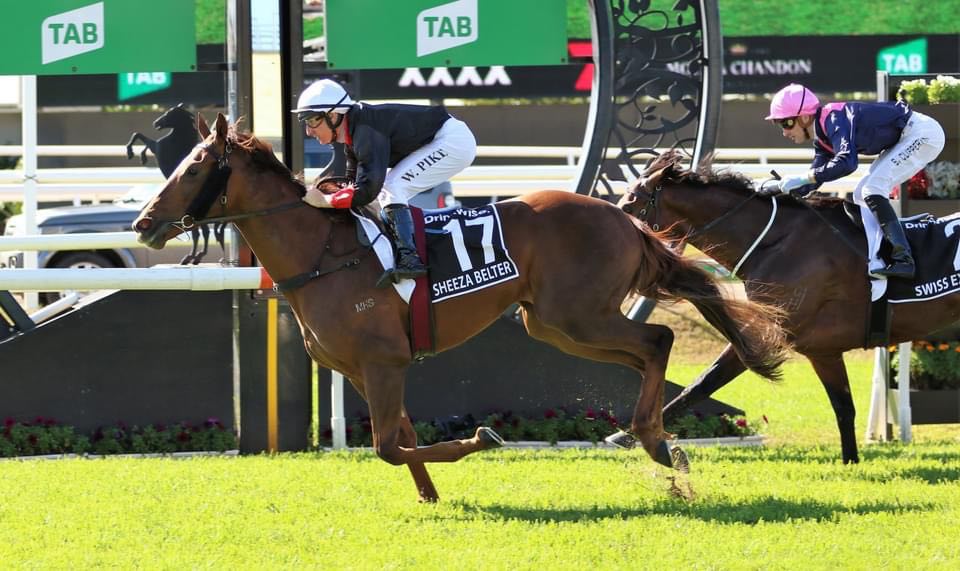