Gold Front Thoroughbreds continued its winning run at Ascot with Said No One Ever in the Budget Car & Truck Rental Maiden (1500m) on Wednesday.

Said No One Ever (Deep Field) is trained by Dan Morton and is a stablemate of Gold Front filly Snickerdoodledandy (Snitzel) who won the LR Burgess Queen Stakes (1400m) on Melbourne Cup day.

The Breera nursery has also been represented by city winners Acromantula (Written Tycoon) and Igarashi (Slater) in the last month. 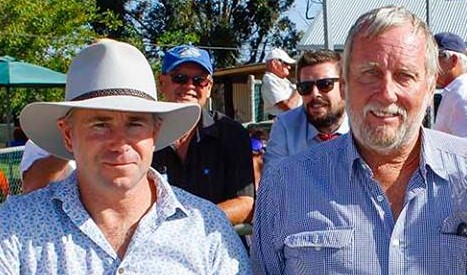 “I thought he would run a cheeky race today,” Morton said.  “He’s big and raw and with more maturity will develop into a nice horse.”

Said No One Ever was entered for the 2018 Perth Magic Millions as part of the Gold Front draft but was withdrawn prior to the sale.  His dam Hidden Wonder (Danzero) won a LR Belle of the Turf Stakes at Gosford and was also a close-up fourth in Captain Sonador’s G1 Epsom Hcp at Randwick.

Gold Front’s Alan Olive (pictured with Morton) bought her for $285,000 as a broodmare prospect at the 2014 Magic Millions National Sale.  She has thrown city winners Canberra (Warwick Farm) and Denero (Sandown) and her latest foal is a yearling colt by Awesome Rock.

Said No One Ever settled three-wide with cover and took command in the straight before denying Doowahdiddy (Blackfriars).  “He was on the wrong leg and did well to fight back at the finish,” jockey Chris Parnham said.  “He’s taken a while to come good but feels like a progressive type.”