Enticing Star faces her Group 1 moment of truth in the Winterbottom Stakes (1200m) at Ascot this Saturday.

The Testa Rossa mare lost her unbeaten record in the Lee-Steere Stakes Gr.2 on November 10 but she remains the pick of the local brigade at $6 behind visiting mare Viddora who is the $2.60 favourite.

Enticing Star is a homebred for Bob and Sandra Peters who dominated the Railway Stakes meeting with four winners last Saturday.  “She’s all right…she just didn’t do it in the Lee-Steere,” Peters said this week.  “She was in season so there was no reason not to go ahead.”

Trainer Adam Durrant has added blinkers on Saturday and Peters wasn’t perturbed when she drew wide in barrier 13.  “It doesn’t matter with her.  But she’s going to have to pull out something really good from the back.”

Testa Rossa, who is in semi-retirement at Vinery, sired her from Favourite Star (More Than Ready) who is closely related to Group 2 winners Perfect Jewel (WA Guineas) and Star Exhibit (Perth Cup).  Peters bought into the family at the 2001 Inglis Easter yearling sale when he purchased their second dam Lady Ashford (Royal Academy) for $130,000 from Vinery.

The Tourism WA Trophy (1100m) follows the Winterbottom Stakes and More Than Ready can bob up with Dam Ready.  Formerly with Lindsay Park, he is now trained by former Geelong AFL champion Mark Bairstow on the coast at Port Kennedy.

“They went helter-skelter and he got cover,” Bairstow said after the last-start win at Ascot.  “Mitch (Pateman) held him up and he really got home.  I like the horse – he can find the line with big weights.”

Dam Ready’s dam Waterwise (Zabeel) is out of a half-sister to Catbird (Golden Slipper Stakes Gr.1) and Danbird (Pago Pago Stakes Gr.2).  She was bred by Gerry Harvey at Baramul Stud and the Vinery legend also sired her Brisbane stakes winner Centre Pivot.

All Too Hard has a Baramul-bred mare with Golden Slipper links knocking on the door for a city win at Ascot.  His last-start Northam winner Fine Scent has been entered for the TABTouch Regional Championship (1200m) by in-form trainer Simon Miller.

Fine Scent is raced by Ray Meadowcroft and is a half-sister to 2003 Golden Slipper winner Polar Success (Success Express).

All Too Hard has several winning chances spread over the Canterbury card on Friday night and, apart from Fine Scent, there’s more in the pipeline around Australia on Saturday with Behemoth (Moonee Valley), Curdled (Doomben) and Over And Above (Morphettville).

On a more delicate note, Demonetization has paid the price for losing his will to win in New Zealand.  All Too Hard’s one-time NZ Derby favourite has been gelded after a disappointing display at Pukekohe last week.  “He should have won that in a canter,” trainer Nigel Tiley said.  “He’s a big boy and he knows he’s a boy, he can be a bit of a handful at the races.  I know how good he is and it’s just something we had to do.”

Tiley has earmarked next year’s Livamol Classic Gr.1 as a long-term target for Demonetization.

In California on Sunday, More Than Ready mare Uni can climax closing day of the Del Mar autumn season with her first Group 1 in the Matriarch Stakes.

Trainer Chad Brown has also entered her top-class stablemates Quidura and Rymska for the $300,000 feature on turf over 1600m.  They’re part of a competitive field of fillies and mares assembled by Del Mar racing secretary David Jerkens

“I think it’s very deep in quality,” Jerkens said.  “I’m very pleased with the shippers and the local horses.”

Vasilika (Skipshot) leads the home-front for trainer Jerry Hollendorfer after recent wins in the Rodeo Drive Stakes Gr.1 and Goldikova Stakes Gr.2 at Santa Anita.  Back in February, she was claimed by Hollendorfer for $40,000!

Uni (4f More Than Ready – Unaided by Dansili) is unbeaten on the east coast this year following wins in the Plenty of Grace Stakes LR at Aqueduct, De La Rose Stakes LR at Saratoga and Nobel Damsel Stakes Gr.3 at Belmont.

Brown sent Uni to Santa Anita for the Gamely Stakes Gr.1 in May but she was sidelined with travel sickness.  “The ownership group was patient,” Brown said.  “We were able to get her back feeling right again after that illness and she has been training well.”

More Than Ready continues to astonish the team at Vinery.  He has just enjoyed another week of 100% fertility, the fifth time for the current season.  “He’s getting through his book here with great ease,” Vinery’s Sales & Nominations Manager Adam White said.  “His record speaks for itself and he has a full book of mares waiting in Kentucky.” 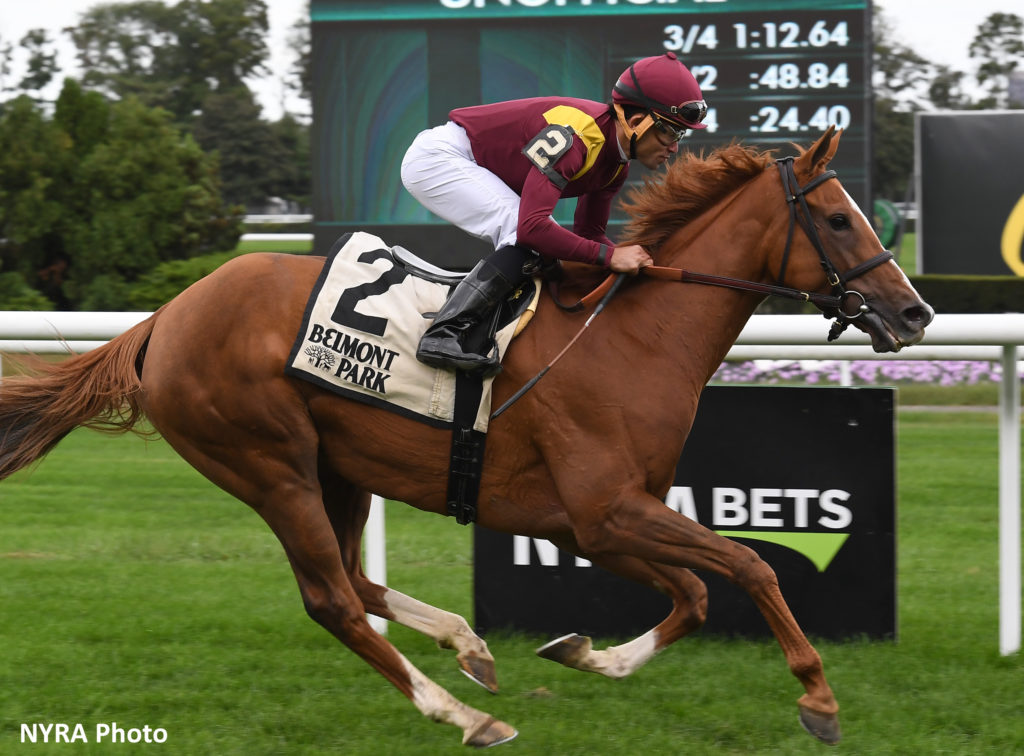