David Payne reckons the potential to win a classic is a good enough reason to spell his in-form two year-old The Mighty Fed.

The champion trainer is already looking ahead to the spring after his powerful son of All Too Hard stayed on strongly to defeat Debonairly (Snitzel) at Randwick on Saturday.  It followed a similar win at Warwick Farm but Payne said the youngster will be in a paddock next week.

“He’s a serious horse for next season,” Payne said.  “You won’t see the best of him until he gets to the mile.”

The Mighty Fed will be trained to the minute for the Group 1 Caulfield Guineas (1600m) on Saturday, October 14.  His sire All Too Hard won it in 2012 before retiring to Vinery Stud.

“Hopefully, he keeps developing into a Caulfield Guineas horse in the spring,” Payne added.  “He will just get better and better.  It looks like we’ve got something special so we will look after him.”

“He’s a horse with a laid-back attitude and that will help as he gets over more ground,” winning jockey Tim Clark predicted.  “He quickened nicely today and was very strong late.”

The Ciaran Maher trained 2yo colt Villermont will face the starter for the first time at Ballarat on Monday.  His dam Bollinger won a Group 1 Coolmore Stakes and second-dam Bint Marscay won a Group 1 Golden Slipper.

Tim Clark will pilot John Sargent’s All Too Hard 2yo All Too Sweet at Randwick’s Anzac Day meeting on Tuesday.  His dam Rightly So was a Group 1 winner of the Ballerina Stakes at Saratoga. 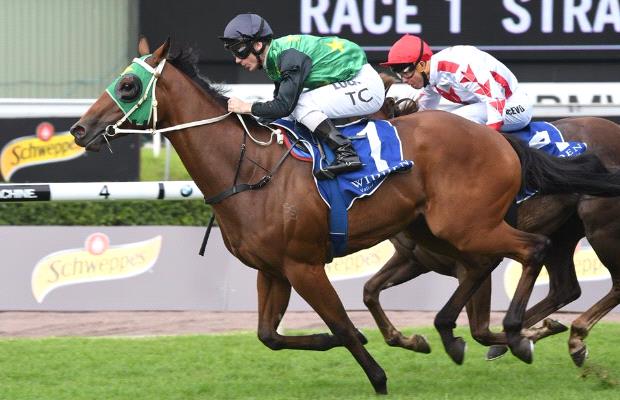