Vinery graduate Exhilarates takes the next step towards her spring grand-final in the Atlantic Jewel Stakes LR at Moonee Valley on Saturday.

And it would be fitting if she were to live up to a $2.30 pre-post quote when racing second-up tomorrow.  Atlantic Jewel was a Vinery-bred graduate and among her Group 1 triumphs was the One Thousand Guineas at Caulfield in 2011.

Exhilarates (Snitzel) is currently quoted at $11 for this year’s One Thousand Guineas but will challenge stablemate Flit ($8) for favouritism if she reproduces her performance from the Quezette Stakes Gr.3 a fortnight ago.

“She was outstanding first-up and her gallop at Moonee Valley on Tuesday suggests she’s held her form,” Godolphin trainer James Cummings reported.  “She worked with Pin Sec and they both handled The Valley nicely.”

Stable jockey Kerrin McEvoy confirmed Exhilarates has lost none of the brilliance that propelled her to a stunning victory in the $2 million Magic Millions 2yo Classic RL in January.  “She’s a serious filly and has really come on this season,” he said.  “It was a very good effort in the Quezette.  She was dominant that day.”

Godolphin bought Exhilarates from Vinery for $600,000 at the 2018 Gold Coast Magic Millions yearling sale.  She’s the first foal to race from More Than Ready’s Group 1 winner Samaready and has already earned $1.46 million.

Vinery sire All Too Hard has hardly been out of the news since the start of the season with 23 individual winners headed by Behemoth’s black-type in the Penny Edition Stakes LR last weekend.

Over in New Zealand, there’s a forgotten All Too Hard galloper named Dratini who makes a comeback in the Stevo’s Distributors 1200 at Wanganui this Saturday.  Twelve months ago, he was being hailed a Group 1 horse before things went wrong big time.

Dratini won a Waverley maiden after giving the leaders 20 lengths at the half-mile and that brought his NZ 2000 Guineas odds tumbling down from $51 to $17.  His final trial was the Sarten Memorial Gr.2 at Te Rapa but a mid-race meltdown saw him tailed off and out of the classic.

Transferred to Bryce Newman earlier this year, he returned to action with a four-length victory in a Foxton trial last month and the Bulls-based trainer is enjoying the challenge of picking up the pieces and getting him right.

“He’s had a few setbacks and they all stem from a back problem,” Newman said this week.  “He’s got ability alright but was aggressive and refused to settle.  He’s a real good type at 16.2 hands and hopefully we’re on the way to sorting him out.”

Notwithstanding those issues, Dratini is bred to make the grade.  All Too Hard sired him from Dorabella (Postponed) who was a Group 1 winner of the NZ 1000 Guineas and Captain Cook Stakes in 2006-07.  Offered by Kia-Ora Stud at the 2017 Gold Coast Magic Millions, he was a $150,000 buy for agent Paul Beamish acting on behalf of Hong Kong-based Dynasty Racing.

Newman has also just finished the early prep of the All Too Hard – Fasline colt that’s been entered as Lot 248 for the Magic Millions 2YO Sale at the Gold Coast in October.  “Paul (Beamish) bought him at Karaka and he broke-in like a good horse,” Newman said.  “He was travelling nicely on the bridle by the time we sent him across to Australia.”

Fasline (Fasliyev) was a 2yo stakes winner at Morphettville for Phillip Stokes and her All Too Hard expat Super Emperor gave the pedigree a winning update in Singapore last month.

All Too Hard’s Melbourne-based 2yo filly Difficult won the first Victorian juvenile trial of the season at Cranbourne on Monday.  The John Maloney-trained youngster scooted clear to score by three lengths in an 800m hit-out from Lindsay Park stablemates Divine Caprice (Sebring) and Mauser (All Too Hard). 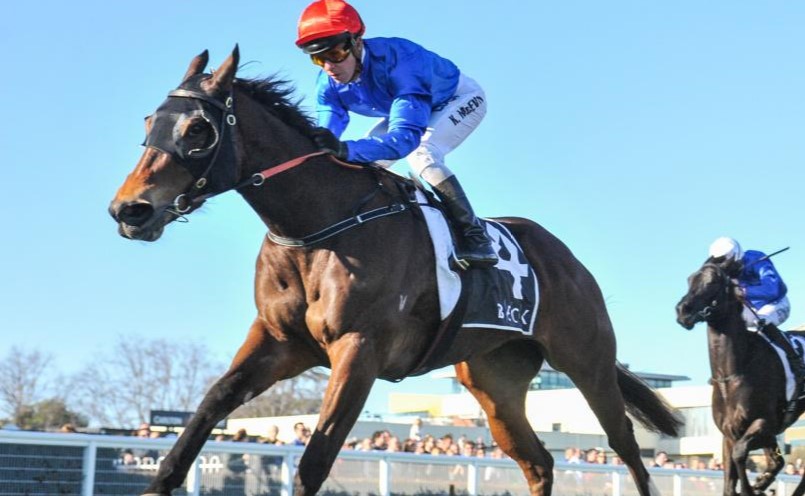